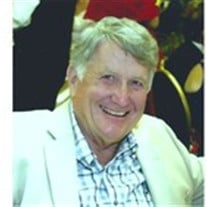 Life Legacy Life enthusiast, Willmore (Bill) Frederick Holbrow, Jr., passed peacefully on March 4, 2018 at the age of 77. He was born in 1941 in Dorchester, Massachusetts to Wilmore Frederick Holbrow and Marguerite Callahan Holbrow. He graduated from Boston Latin School in 1958, the Air Force Academy in 1962, and received his Master’s Degree in aeronautical engineering from the Massachusetts Institute of Technology in 1964. He was an entrepreneur in the biomedical field, developing portable EKG machines at his own company, International Equipment Company (later Luxon Industries). He transitioned to the telecommunications field in the mid 1980s, finding a new outlet for his love of life-long learning as an independent consultant. He was a storyteller, private pilot, excellent skier, regular golfer, frequent flyer at Yosemite, but most importantly a family man. There were no strangers to Bill, only friends he had yet to meet. He was a tremendous example of generosity and kindness and would lend a hand to anyone who asked. Most of all he will be remembered for his constant, welcoming smile that endeared him to so many, earning him the nickname Happy Holbrow. He is survived by his loving wife of 53 years, Mary (Erwin) Holbrow, originally of Braintree, MA, his sisters Mary Holbrow Long, and Laura Holbrow Griffin, and his children Ann Holbrow Verwiel and her husband Mark, his son Willmore Frederick Holbrow III, and Maureen Holbrow Martin and her husband Bryan. Some of his happiest moments were spent enjoying his grandchildren, Willmore IV, Haley, Christopher, Jake, Ethan, Taylor, and Gabbie. He will be missed dearly by all those who loved him. A wake is planned for Friday, March 9th, 2018 from 5:30 – 8:00pm at Memory Garden Memorial Park & Mortuary in Brea, CA. A funeral mass will be held at St. Denis Church in Diamond Bar, CA at 3:00pm on Saturday, March 10th, 2018.

The family of Willmore 'Bill' Frederick Holbrow Jr. created this Life Tributes page to make it easy to share your memories.