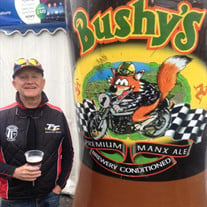 Bill was born to William and Rose Leek on June 7, 1943 in Birmingham, England. Bill often talked about his childhood and the wonderful memories he had growing up surrounded by a loving and supportive family. As a child Bill enjoyed sports and loved to ride his bicycle. As he got older he joined a bicycle club where he would participate in road riding and track racing. Bill's love for cycling continued throughout his life and he was a member of local cycling club Canyon Velo for more than 35 years. By the time he was 15 Bill's life-long love of all things with 2 wheels became apparent and his dad, Uncle Chuck, cousins Don and Eddy encouraged his curiosity in motorcycles and gave him hands on lessons on how to build and repair them. At the age of 16 Bill made his first trip to the Isle of Man for the TT races. The TT races would become an annual pilgrimage and the time spent with friends was the highlight of each year. With his easy-going nature, quick humor and friendly smile Bill made a lasting impression on all those he came into contact with. Bill has always had many friends but two were lifelong friends and he considered them his brothers. Bill met Freddy Shaylor when they were 5 years old and remained friends until Fred’s passing about 7 years ago. Ray Willis and Bill met when Bill was 15. Their shared love of motorcycles and friendship lasted until Ray passed away in May 2020. Bill’s professional career began when he left school at the age of 15 to begin his tool and die apprenticeship. Completing his apprenticeship at age 21 Bill was determined to try and learn all different aspects of tool and die work and worked for many tool rooms around his hometown of​ Birmingham. In 1982 Bill followed a dream and moved with his family to California to continue his work as a tool and die maker. In 1983 he was offered a position in the tool room at Simpson Strong Tie in Brea, California. Bill retired after 20 years at Simpson Manufacturing headquartered in Pleasanton, CA. During his tenure at Simpson Strong-Tie Bill was actively encouraged to ride his bicycle at any time because he always came back with ideas for new products. Bill is listed as the inventor of over 50 patents held by Simpson Strong-Tie and always insisted that anyone who offered a suggestion or worked on the patent also be named as co-inventor. In a male dominated industry Bill worked side by side at Simpson with two women he had much respect for, Karen Colonias, and Jacinta Pister. When notified of his death both reached out to Carol to offer their personal condolences for a ‘truly special man’ who was ‘always such a happy presence’ and a ‘creative genius.’ Bill was the most loving, kind, caring, and compassionate man you could ever meet. His family was the most important thing to him. Bill leaves the love of his life and wife of 39 years, Carol. Their strong bond, love, and friendship is a true testament to their relationship and their close relationship with their family. Bill is survived by his sister Norma (John), sons Karl (Helen), Paul (Alice), Matt (Denise) and Will (Marijke). Bill was a loving and greatly loved ‘Papa’ to 6 grandchildren Mackensie, Rosie, Landon, Mason, Katelyn and Brayden. He leaves 3 fur grandchildren big kitty, engie, and Gladys. In lieu of sending flowers please consider donating to help others. Bill was a very caring individual that always wanted to help others and had a soft spot for animals. With that in mind we would like for you to consider donating to either Habitat for Humanity or Irvine Animal Care Center on behalf of Bill Leek. https://www.habitat.org/donate/?keyword=header https://www.cityofirvine.org/irvine-animal-care-center/donate-support

Bill was born to William and Rose Leek on June 7, 1943 in Birmingham, England. Bill often talked about his childhood and the wonderful memories he had growing up surrounded by a loving and supportive family. As a child Bill enjoyed sports and... View Obituary & Service Information

The family of William F. Leek created this Life Tributes page to make it easy to share your memories.

Send flowers to the Leek family.