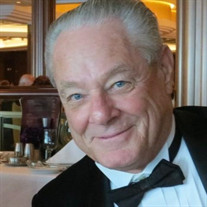 Wesley Kinsley Wesley Kinsley, 78, beloved Husband, Father, Grandfather and Brother, was called to his eternal resting place on August 6, 2020. He entered this world on January 1, 1942 in Hollywood, California, born to Eugene and Frances Kinsley. Wesley is survived by daughter, Linda Kinsley Rodrigo; grandsons, Corey Rodrigo and Connor Rodrigo; brothers Donald Kinsley and Robert Kinsley. Wesley was preceded in death by his wife, Pauline Kinsley, and brother, Larry Kinsley. Wesley joined the Air Force shortly after graduating from Morningside High School. He served four years, including time spent in Germany. He served in the Air Police before his honorable discharge in 1963. Wes met Pauline in 1964 and they were married later that year. They enjoyed over 55 years of marriage, raising daughter Linda, traveling the world, and enjoying time with Linda, and grandsons Corey and Connor. Wes and Pauline enjoyed many different trips, but some of their favorites were their trips to Africa and Antarctica, along with a 62 day cruise. Wesley worked for United Parcel Service for over 30 years, proudly serving the company in many roles, from package driver to management, and then in labor relations. He was well respected by those who worked with him. Wes retired from UPS in 1995. One activity that Wes relished was watching his grandsons play sports. From the time they were little, through high school and college, there were few games that Wes and Pauline missed. They were a common sight in the grandstands and knew the players and fans alike. Wes took great pride in all of Corey and Connor’s accomplishments on and off the field. Grandpa’s presence was an instrumental part of their lives. Wesley was a true family man, devoted to doing everything for his wife, daughter and grandsons. He gave from the heart and his presence will be greatly missed. Wesley will be interred at Memory Garden Memorial Park in Brea, California. A memorial mass and a celebration of Wesley's life will be held at a later date. The family requests that, in lieu of flowers, family and friends consider a donation to the Alzheimer's Association, in honor of Wesley who spent the final years of his life caring for Pauline. “What God has joined, let man not put asunder.” (Mark 10:9) Donations to the Alzheimer’s Association may be made to the following link: http://act.alz.org/goto/Wesley_Kinsley_Tribute

The family of Wesley Kinsley created this Life Tributes page to make it easy to share your memories.

Send flowers to the Kinsley family.