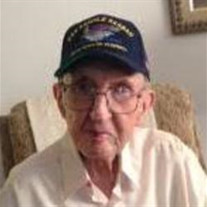 On Monday, March 9, 2015, at the age of 96, Walter Edward Enerson passed away peacefully at the home of his daughter and son in law in Rancho Cucamonga California. Walter is survived by his daughters, Linda (Marc) Plumley of Rancho Cucamonga CA, Elissa (Lee) Seals of Yorba Linda CA, his four grandchildren, Brenda (Anthony) Casias, Melissa Seals, Christopher Plumley, Sarah (Cannon) Redd and three great-grandchildren Orion, Hope and Skylar Redd. Walter was proceeded in death by his parents, Otto and Lisa Enerson, his brother Elmer “Dutch” Enerson, his sisters Irene Rainville, Louise Payne, Lora Blachard and his beloved wife of 43 years, June Enerson. Walter was born at home on January 2, 1919 in Capitol Montana where he resided until he joined the Civilian Conservation Corp, in the late 1930's. He served in the United States army from 1941-1945. Upon returning home from World War II, his family had moved to Southern California and he settled there as well. In July 1946 he married June McMurray. They moved several times before purchasing a home in Pico CA, in 1952. That same year he started his career with North American Aviation in Downey CA as a tool maker. He continued to work on several space programs including the Mercury, Gemini, Apollo, and the Space Shuttle. In 1959 Walter moved his family to Brea CA where he lived for 55 years. After his retirement from Rockwell International in 1984, Walter found a hobby in photography that he would enjoy for several years. He joined the Viewfinders Camera Club in La Habra CA which gave him an opportunity to share the many photos he took while traveling with his wife June. After June passed away in 1990 he continued to keep busy enjoying time with his children, grandchildren, good friend Eleanor, "Ellie" Burg and her family. Our family extends a special thank you to the Hospice Staff at the Visiting Nurses Association of Southern California in Claremont for their dedicated care of Walter the past four months. A funeral is scheduled at Memory Gardens Memorial Park, Brea, CA on March 18th at 9:45am. Following the service a reception will be held at the same location. All are welcome to attend and celebrate Walter's life.

On Monday, March 9, 2015, at the age of 96, Walter Edward Enerson passed away peacefully at the home of his daughter and son in law in Rancho Cucamonga California. Walter is survived by his daughters, Linda (Marc) Plumley of Rancho Cucamonga... View Obituary & Service Information

The family of Walter E. Enerson created this Life Tributes page to make it easy to share your memories.