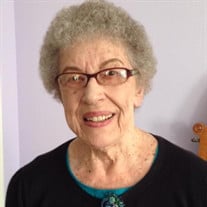 Virginia Schulz Wilson Mercier, born May 18, 1926 in Southgate, California, died peacefully in her sleep on January 1, 2021, in Brea, after a long battle with cancer. A beloved mother, grandmother and great-grandmother, Virginia worked for many years as an executive secretary at NL Shaffer and at Astech Manufacturing. In her later years, she earned both an undergraduate degree and a Master’s of Science Degree in Gerontology at Cal State Fullerton. With her first husband, Harold Wilson, she had three children and enjoyed camping and square dancing. Two years after their divorce in 1975, Virginia happily remarried Ambrose “Joe” Mercier and became stepmother to his twelve children. She and Joe enjoyed traveling by car as well as taking cruises. They loved square and line dancing, an activity that she continued—even teaching line dancing—after his death in January, 2000, until neuropathy prevented her from continuing. She was an expert at crochet and gave away a large number of comforters to family and friends. Virginia attended the Pageant of the Masters annually for more than fifty years, treating family and sometimes friends to tickets. She also hosted an annual Christmas party for her large blended family, and arranged for Santa to give presents to the youngsters. Also, while her children were growing up, she often volunteered at the All Nations Foundation, which was then the largest social welfare organization in Los Angeles. In 2008, Virginia joined the Church of Jesus Christ of Latter Day Saints and was baptized by her grandson, Steven. She became very active in church groups. Virginia is survived by her brother Fred Schulz, her sister-in-law Karen Schulz; her children Kurt Wilson, Ken Wilson and Denise Wilson; 12 stepchildren, 19 grandchildren, and 49 great-grandchildren. A small private service and burial was held at Memory Garden in Brea, where Joe is also buried. After Covid, a large gathering of her family is planned.

Virginia Schulz Wilson Mercier, born May 18, 1926 in Southgate, California, died peacefully in her sleep on January 1, 2021, in Brea, after a long battle with cancer. A beloved mother, grandmother and great-grandmother, Virginia worked for... View Obituary & Service Information

The family of Virginia Mae Mercier created this Life Tributes page to make it easy to share your memories.

Send flowers to the Mercier family.