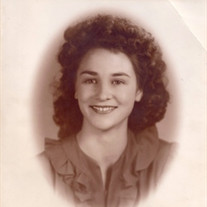 Biography Vernell Stobaugh Sanderson           The dancing eyes and warm smile of Vernell Stobaugh Sanderson left this broken world after almost 87 years of adventure on February 24, 2017 as her soul went back to God, Who gave it.           Vernell was born during the Great Depression on March 31, 1930 to Arthur A. and Birdie Sumners Stobaugh near Formosa, Arkansas.  She was the sixth of seven children in a simple farm family that valued education, hard work, honesty and good humor.  They farmed in Arkansas and then near Bragg City, Fisk and Risco, Missouri on land they did not own but were active in their communities and especially the schools.  She read all the books in her high school in the small town of Risco and went on to community college to study, returning to work as a secretary for the school.           Her life changed when she and Robert Sanderson fell in love. They eloped to Piggott, Arkansas in May, 1949, where they awakened the Justice of the Peace to marry them.  She followed Bob to Albuquerque, New Mexico and then to California as he served in the U.S. Air Force, giving birth to sons Ed in 1950, Roy in 1952 and Richard in 1956.  She devoted herself to nurturing her boys and caring for the homes in Long Beach and Buena Park.  She returned to college and to work in local schools after her boys graduated high school and continued until health challenges redirected her activities.            Vernell became the neighborhood’s walking friend in Anaheim after 1977 and grew close relationships with many there, including those from other countries who sought her help in learning English and qualifying for citizenship in the country she loved.  Her devotion to God and active service in churches of Christ in Long Beach, Bellflower, Brea, Garden Grove, West Anaheim and Tustin were the center of her life.  She loved using the telephone to encourage and strengthen fellow Christians and developed her role as “The Birthday Fairy” to church members and friends.           Her fame for kindness, compassion and warm humor will long endure among those graced to know her or cross her path.  Thanks, God, for Vernell. She is survived by Husband Robert Sanderson and three Sons: Ed Sr. with wife Alyce of Vacaville, CA, Roy of Burbank, CA, and Richard with wife Dalarie of Orange, CA, as well as by 10 Grandchildren – Ed and Dave Sanderson, Katy Johnson, Emily Weaver, Bob and Bill Sanderson, Whitney Prentiss and Jordan, Jake and Grady Sanderson -- and 17 Great-Grandchildren – Drew, Quincy, Cole and Chase Sanderson, Charlie, Ben and Truman Sanderson, Daniel, Teddy and Ruby Scout Johnson, Sydney and London Prentiss, Kaydyn Sanderson, Sarah, Zack and Tom Weaver, and Maxwell Sanderson.            She is also survived by Brother Charles A. Stobaugh of St. Louis Missouri and many Nieces and Nephews.           She is preceded in death by her parents, Arthur A. and Birdie Sumners Stobaugh as well as by Brothers Lindell and Frank “F.C.” Stobaugh, by Sisters Audree Oliger, Bonnie Bradley, and Thelma Thurman, and by her beloved Daughter-in law Jeannette Yamagata Sanderson. There will be a memorial service at 10 am on March 18 at the church of Christ that meets at 16481 E. Main, Tustin, CA 92780. Funeral will be private and remains located at the Riverside National Cemetery at 22495 Van Buren Blvd. in Riverside, CA 92518.

The family of Vernell Stobaugh Sanderson created this Life Tributes page to make it easy to share your memories.