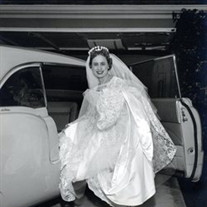 Life Legacy Theresa De Franco Mingirulli, age 87- On June 9th, 2017, Theresa went peacefully to join our heavenly father with family by her side at Las Palmas home care facility in Fullerton, California. Theresa was born on February 24, 1930 in Boston Massachusetts to Domenic and Carmela De Franco, their youngest and only daughter. The Family moved to Northern California when Theresa was only 5, and eventually the family's produce business brought them to Los Angeles.   Theresa graduated Dorsey High School,  and attended USC, as a business major enjoying  the friendship and social activities of her sorority  sisters.  Theresa worked for her family owned business, New England Tomato Company, D. De Franco and Sons, where she met and married  the love of her life, Joseph Mingirulli.   Theresa devoted her life as homemaker and manager, along side her husband, in their business, and raising their two children. She loved being Magra to her grandchildren and great grandchild, supporting enthusiastically in everything they loved to do and taking active interest in their lives. Her sense of humor kept us entertained for hours. You could often find Theresa in the kitchen while she entertained large parties, encouraging everyone to fix a plate regardless if they had already eaten; not eating wasn’t an option at her house. Her family will feel a big hole where she used to reside in our family. We will miss her dearly.   She is survived by her daughter, Maria Mathey of Banning, California, and her son, Domenic Mingirulli of Fullerton, California, along with her 3 grandchildren, Aaron Stewart, Meagan (Garrett) Clark, and Dylan Mingirulli, and 1 great grandson, Vincenzo Mingirulli.   She was preceded in death by her parents, Domenic Giovanni & Carmela Marie De Franco, Brothers Victor & Salvatore De Franco, and Beloved husband of 46 years, Joseph Mingirulli.   Please join the family in a viewing service to be held at Memory Garden from 12-2, with a celebration of life service following at 2:30.

The family of Theresa Marie Mingirulli created this Life Tributes page to make it easy to share your memories.