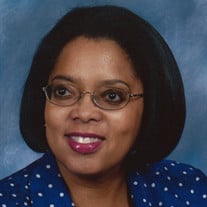 Sheila Wiley Pugh passed away on Friday June 19, 2015 after years of struggle battling cancer. She passed with the knowledge that her family loved her and understood her decision to carry the burden of her condition in virtual silence, not wanting to worry her family and many friends. Her father Robert, mother Patricia, brother Eric, and sister Tiffany, preceded her in death. She is survived by her husband Michael, son Kani, brother Alan, and sister Rita. She is also survived by many cousins, uncles, aunts, nieces, nephews, four sister-in-laws, two brother-in-laws, and her mother-in-law. Sheila was born in East Chicago, Indiana, and at an early age her family moved to East St. Louis, Illinois. Sheila was a devout Christian, who as a youngster accepted Christ at First Street Baptist Church. She graduated from Lincoln High School in 1980 and went on to college at the University of Kansas. She graduated with dual degrees in journalism and psychology. After a short stint of employment with the J.C. Penney corporation in Chicago, she began a long tenure of employment with Equifax, later ChoicePoint, a credit and employment background investigation company. She rose to the position of Vice President of Quality Assurance, and achieved certification as a Certified Quality Auditor, (CQA), and certification as a Six Sigma Green Belt (SSGB). Sheila never lost her love for life and fought her illness to the end, with a smile and quiet understanding. She regretted having to leave this place at such an early age, and desired that everyone who loves her, remember her as a vibrant, loving and caring person. Her husband and family are immensely grateful to the doctors, nurses, and staff of St. Judes Hospital, for the care provided for Sheila throughout her years of treatment. We are especially grateful for the loving care taken to ensure that Sheila’s last hours were peaceful, pain-free, and dignified.

Sheila Wiley Pugh passed away on Friday June 19, 2015 after years of struggle battling cancer. She passed with the knowledge that her family loved her and understood her decision to carry the burden of her condition in virtual silence, not... View Obituary & Service Information

The family of Sheila Debor Pugh created this Life Tributes page to make it easy to share your memories.