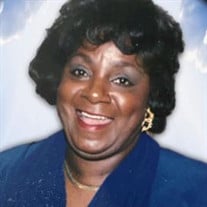 Roslyn Carrie Thompson-Hill (Harris) was called home by our Heavenly Father on January 21, 2021, at the blessed age of 83. While her family was lifting her up in prayers, her son Mark was able to spend time at her bedside just hours before she was called to heaven, from Fullerton, California. Roslyn was the youngest of seven children born on August 29, 1937 in Akron, Ohio, to the union of John Harris and Clara Belle (Glover) Harris. Roslyn’s parents were both from Georgia. Roslyn’s parents preceded her in death, along with her loving spouse of nineteen years, Rev. Dr. William E. Hill, of Los Angeles, California and adoring spouse of three years, Abraham Criglar of Los Angeles, California, her sisters, Dorothy Robinson, Anna Vera Hearns, Audrey Jean Heard, Johnnie Mae Bivins, and her beloved twin brother Ronald Grant Harris, all of Akron, Ohio. She attended West High School in Akron, OH and after graduating; Roslyn married her high school sweetheart, Nelson Thompson of Birmingham, Alabama, on Christmas Eve, 1956 in Akron, Ohio. Three children were born from that union. After moving to California in the early 1960’s, Roslyn and Nelson settled down in Compton where they raised their three children, Mark, Valerie and Terri. Roslyn was a very caring mother who loved children and young people and they seemed to naturally gravitate towards her. After parting ways with Nelson, she continued to raise her children, attended Compton Community College where she earned a BA and attended Cal State Los Angeles where she graduated with a Masters degree in Sociology, all while working full-time positions, including at Cal State Dominguez Hills, where in 1973 she began her long career as an office manager with the Associated Student Body. She was promoted over time to become their business manager and eventually became their general manager, retiring in 1999 after twenty-six years of faithful service. Roslyn was instrumental in helping Associate Students achieve their nonprofit status in April 1990. During her twenty-six years, Roslyn touched many young lives and was instrumental in helping numerous students to achieve their dreams, many of them first generation college graduates. Roslyn navigated the waters of this highly political environment while achieving various goals for the organization and maintaining their financial records in accurate order for their annual audits. She was affectionately known as Roz. Roslyn was an active member in her churches and their choirs. She often could be found serving at United Methodist Church of Compton and at Brown Memorial AME in Los Angeles. In 2001, she joined Ward AME Church, where her husband, Dr. Bill served as the assistant Pastor under Rev. Norman D. Copeland, who was his best friend in the ministry. Dr. Bill was the assistant Pastor under Rev. Copeland; Rev. Laudermill, Rev. Williams, and Rev. Nixon until Dr. Bill passed away in 2010. Roslyn served as the First Lady at Brown Memorial AME and Ward AME. She was in the Women’s Day Chorus and the Lay Organizations at Ward AME where she worked with children. Roslyn was known at Ward for her beautiful fashion sense and unique hats. Roslyn was extremely fond of all types of music, where her taste in music ranged from classical, R&B, opera and everything in between. She sang in the United Methodist Church of Compton choir for many years. Under the direction of Dr. Hansonia Caldwell, Roslyn sang with the Dominguez Hills Jubilee Choir for over ten years where she was selected to be a soloist. She had an angelic voice. In the early 2000’s she sang with Christ Temple Church Choir under the direction of Paul Moore for special events including Christmas cantatas. Roslyn leaves to cherish her memories, son, Mark G. (Linda) Thompson of Yorba Linda, CA; daughters, Valerie A. Thompson of Los Angeles, CA; Terri L. (Albert) Miles of Gardena, CA; sister, Claudia Caldwell of Akron, OH; grandchildren, William L. Price of Inglewood, CA; Jason J.A. (Rosanne) Thompson of Fullerton, CA; Armon J.R. Washington of Los Angeles, CA; Micah A. Crear of Anaheim, CA; Ajalee K. Thompson-Hill of Paramount, CA; Star Salazar of Lynwood, CA; Alexandria Price of Inglewood, CA and great-grandchildren, Jazmyne, Tatyana, Rayanne and Jayce Thompson of Fullerton, CA; Nailah and Angela Price of Inglewood, CA; Charles Davidson of Inglewood, CA and a host of cousins, nieces (of which Roslyn shared a very close relationship with her niece Gloria “Cookie” Bivins) and nephews and many other relatives and friends.

Roslyn Carrie Thompson-Hill (Harris) was called home by our Heavenly Father on January 21, 2021, at the blessed age of 83. While her family was lifting her up in prayers, her son Mark was able to spend time at her bedside just hours before she... View Obituary & Service Information

The family of Roslyn Carrie Thompson-Hill created this Life Tributes page to make it easy to share your memories.

Roslyn Carrie Thompson-Hill (Harris) was called home by our Heavenly...

Send flowers to the Thompson-Hill family.