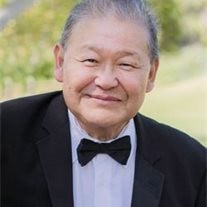 Ronald “Ron” Ichio Fukushima, age 69, passed away peacefully at home in Fullerton on the morning of January 10, 2018. He was born on March 2, 1948 at Queen’s Hospital in Honolulu, Hawaii, to Chester and Florence Fukushima. At a young age, he and his family moved from Hawaii to Boyle Heights, California. They settled in the Crenshaw area, where he grew up. He graduated from Dorsey High School in 1966 and received a Bachelor of Arts degree in Business Administration from Whittier College in 1970. After graduation, Ron taught sixth grade at Hacienda School in La Habra, CA. While he found teaching very fulfilling, he began pursuing a career in the manufacturing sector, specifically materials sales and purchasing. Ron was employed at Fluor Engineers, Inc., Automobile Specialty Co.(ASC), United States Container Corp., and McCann’s Engineering & Manufacturing Co., where he retired as purchasing manager in 2006. Ron married Teri Donna Lee in 1986. Katharine “Katie” was born in 1987, followed by Ryan in 1990. In 1991, they moved to their present home in Fullerton, CA to raise the family. Ron was a devoted father, always attending Ryan’s baseball games and Katie’s clarinet concerts. He was especially proud of Katie graduating from UCLA and Ryan graduating from UC Santa Cruz. Ron was a loving husband, father, son, brother, and uncle. He is survived by his beloved wife Teri, daughter Katharine (Kinbo Lee) Fukushima, son Ryan Fukushima, mother Florence Fukushima, brother Michael (Lourdes) Fukushima, and nieces Christine (Hunter Nixon) Fukushima, Erin Fukushima, and Jessica Fukushima. He is also survived by his aunt Keiko Fukuda and numerous cousins. He will be deeply missed by Teri’s family - his mother-in-law Yuk Jin Lee; Shirley (Keith) Tanaka, Gwen Joe, Cheri (David) Quayle, Joseph Lee, Bessie (Michael) Williams, David Schmitz, and numerous nieces and nephews. He will also be missed by many friends. A memorial service will be held at 11 AM on Saturday, February 24, 2018, at the Cornerstone United Methodist Church, 2050 Valencia Avenue, Placentia, CA. A reception lunch will follow. Hawaiian attire is optional.

The family of Ronald I. Fukushima created this Life Tributes page to make it easy to share your memories.

Send flowers to the I. Fukushima family.