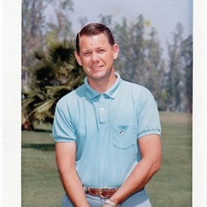 Robert David Kistler passed away on Saturday, March 21, 2015 at the age of 87. He was born in Fort Madison, Iowa on October 22, 1927. He was the second of four children born to Herbert and Wilma (Roberts) Kistler. He grew up in Fort Madison, until he attended Culver-Stockton College in Canton, Missouri. While at Culver- Stockton he was a member of the Lambda Chi Alpha Fraternity, and met the love of his life, Shirley Brown. He graduated with a degree in Psychology in 1949. He moved to St. Louis, Missouri where he married Shirley Brown on April 29, 1950. Bob, as he is best known, moved with his family to Concord, California in 1957, then to La Habra, California in 1959. He remained in that area for the rest of his life. Bob loved God, his family, and golf. He was a long time member of Blessed Sacrament Episcopal Church in Placentia, California, where he served a term as senior warden, and enjoyed singing in the choir. He loved golf and consistently shot in the 70’s most of the time. He passed his love of golf on to his sons and grandson. Bob was a huge St. Louis Cardinals fan, and he brought his children up to be Cardinals fans too, even though they lived in California. You could always find Bob in front of the TV every night at 7:00 PM, watching Jeopardy, and getting almost every question right! He loved donuts from local donut shop, where he met with the “liars club” as he called them. He said they all sat around telling “big” stories! This was a morning ritual until dementia made it impossible for him to go any longer. Dementia did not rob him of his love for his wife and family, and he died peacefully with them all around him. Bob is survived by his wife of almost 65 years, Shirley (Brown) Kistler, his daughter, Laurie (George) Parrott, sons David (Lisa) Kistler, James (Trudy) Kistler, Michael Kistler and Stephen Kistler; grandchildren Jonathan Kistler, Courtney (Robert) Konuch, Kathryne (Daniel) White, Sarah (Matthew) Gilbo, Michaela Parrott, Hannah Kistler and Emma Kistler; and great-grandsons Matthew, Luca and David. He is also survived by his brother Karl Kistler of North Liberty, Iowa and his sister Carolyn Worthen of Garden Grove, California; as well as many nieces and nephews. He was preceded in death by his parents, Herbert and Wilma Kistler and his sister Phyllis Perney of Estes Park, Colorado. Bob will always be remembered with a smile on his face and a golf club in his hand! His life will be celebrated with a requiem mass at Blessed Sacrament Episcopal Church, 1314 N. Angelina Drive, in Placentia, California on Saturday, April 18 at 11:00 AM, with a luncheon reception immediately after the service.

Robert David Kistler passed away on Saturday, March 21, 2015 at the age of 87. He was born in Fort Madison, Iowa on October 22, 1927. He was the second of four children born to Herbert and Wilma (Roberts) Kistler. He grew up in Fort Madison,... View Obituary & Service Information

The family of Robert David Kistler created this Life Tributes page to make it easy to share your memories.

Send flowers to the Kistler family.