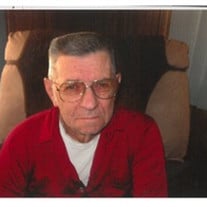 RICHARD A. DAFOE 6/26/37 – 7/23/16 Richard was born in Sioux Falls, South Dakota to Archie & Lois Dafoe (Both Deceased). He was an only child. He passed away from complications of Dementia, http://act.alz.org/site/TR?fr_id=8863&pg=team&team_id=338267 He was in the Navy and severed his time on the USS Cacapon, and was very proud to serve his country. He worked for the Retail Clerks Union (local 1167) for Thriftimart Grocery Stores for 32 years, most of those years were in Riverside, CA, he then went to work for Lucky's Grocery Store in Palm Springs for 5 years. Once he retired from the retail Clerks Union he went to work driving Semi’s for JB Hunt (where he met his Wife Virginia, who was also a Truck Driver) and for CR England for 12 years. Once he retired from driving semi’s, he and Virginia traveled for 8 ½ years in their motor home. Richard was a jokester, and you never knew what he would do or say, but whatever it was, it always got a good laugh from everyone around. His sense of humor will be sorely missed by everyone that knew him. Richard Loved to Hunt and Fish and just be outdoors in general. One of his greatest accomplishments was when tuned 60 he walked from The Top of Cajon Pass all the way to Mt. Rushmore in The Black Hills of South Dakota. His wife Virginia was always close by following him in their Motor Home. When he would get into bad weather or come upon roads he couldn’t walk on, he would walk in local malls to get the miles needed to move ahead. This walk was something he had wanted to do for years. We were all so proud of him. He is survived by his Wife Virginia, his Son Deuce, his Daughter Pam (Joe), his Grandson Michael and his Great Grand kids Cristopher, Zoe and Colin. He is also survived by his 4 Step Children Derrell, Diane, Donald and Daniel, his 11 Step Grand kids and his 14 Step Great Grand kids. He is also survived by 3 Aunts, Marilyn, Darlene and Bonnie and several Cousins that were more like Brothers to him. He was never short on stories of his childhood about things he did with his Cousins. Richard was preceded in Death by his First Wife Sandy of 21 years. He will be missed by his entire family Funeral arrangements are as follows: Memory Garden Memorial Park 455 West Central Ave Brea, California 92821 Monday August 1, 2016 – Viewing 12:00 – 2:00 PM Chapel service followed by Grave side service begins at 2:30 PM

The family of Richard 'Dick' Dafoe created this Life Tributes page to make it easy to share your memories.

Send flowers to the Dafoe family.