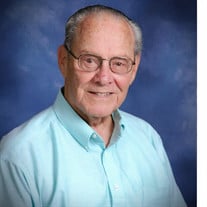 Pat was born in Fajardo, Puerto Rico, into the large family of Henry and Tomasa Ruga. Most of his childhood was spent growing up in Brooklyn, New York, becoming fluent in both Spanish and French which were taught by his parents in the home. Outside of school hours, his enterprising spirit kept him busy shining shoes, carrying ice up flights of stairs to flats for housewives, selling pretzels to factory workers, and collecting bottles to return for deposit to earn a bit of money. Two of his favorite sport activities were roller skating and boxing. He joined the Army when he turned 18 and served overseas for a year in Civilian Employment with the U.S. Forces. While stationed in Berlin he met Mary Shewchuck, working as secretary to a general, to whom he proposed a few months later in Geneva, Switzerland. They were married after returning to the States during the spring of 1948, in her hometown of Cheboygan, Michigan. Pat also served in the Marine Reserves for 8 years, earning the rank of Staff Sergeant, and was very proud of his time in the military. To support his growing family, Pat took a job with Owen-Illinois in Vineland, NJ. There he worked in Quality Control, Safety, and as Head of Sales for the Western States, the last necessitating a move to California. He later returned to NJ for a two-year stint as Plant Manager. Subsequent companies he worked for include JG Bell Plumbing & Fixtures and Acorn Engineering, from which he retired at age 65. An excellent salesman and bill collector, Pat thoroughly enjoyed both the domestic and international travel that his work entailed, greatly aided by the languages learned in childhood. Family was always important to Pat and as his children, grandchildren, and great grandchildren came along he was happy to be surrounded by them all. Until the noise level rose too high that is. At one point he declared that all get togethers should be held outside, when the weather was nice! One of Pat's great interests was boating and he had a succession of boats that he, with the help of his sons, would clean up and resell in order to buy a 'better' one. It was an unfulfilled dream to retire by the water. He never lost his love of travel and enjoyed many cruises. A favorite was cruising thru the Panama Canal, the building of which his father had participated in. Trips to Israel and Switzerland, as well as RV and train trips across the country to visit family, made for many happy memories. Moves to Escondido, CA, Cottonwood, AZ, and Hemet, CA were a welcome change of pace as he felt the desire to slow down a bit. Pat was looking forward to being with his Savior, the Lord Jesus Christ, and passed thru the gates of heaven March 19, 2019 to be welcomed 'Home'. Pat and Mary were blessed with five children,four of whom survive him: John, Mary (Johnston). Joseph, and James. He leaves behind 15 grandchildren, 21 great grandchildren. His dear brother Erastus also survives him, as well as many nieces and nephews. He was preceded in death by his wife of 52 years, Mary, daughter Lin (Johnston), and second wife Virginia.

Pat was born in Fajardo, Puerto Rico, into the large family of Henry and Tomasa Ruga. Most of his childhood was spent growing up in Brooklyn, New York, becoming fluent in both Spanish and French which were taught by his parents in the home.... View Obituary & Service Information

The family of Publius (Pat) Ruga created this Life Tributes page to make it easy to share your memories.

Pat was born in Fajardo, Puerto Rico, into the large family of...

Send flowers to the Ruga family.