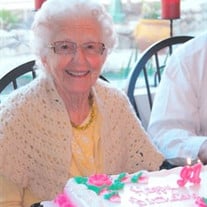 Phoebe M. Matthews, 92, went home to be with her beloved Lord and Savior Jesus Christ at her home in Stevenson Ranch, California on May 15, 2014. She was born on February 8, 1922 in Pittsburgh, Pennsylvania to William and Johanna Saint-Vincent. As an older daughter in a large family, Phoebe had the responsibility of helping her mother tend the home and assist in the care of her siblings. After graduating from high school, Phoebe had the opportunity to train as a practical nurse. After completing her training, she was employed in patient’s homes where she cared for the elderly, new mothers and their newborns. All this training prepared her for a future as a wife and mother. Phoebe met Tom Matthews on a streetcar in Pittsburgh around 1942, and shortly after that they began dating. They were married on September 25, 1943. Shortly after their marriage, Tom was shipped to the South Pacific to serve in the United States Navy during WW II. During this time, Phoebe lived with her parents, where she worked and cared for their firstborn son, Tom, Jr., who was born in 1944. After the war, Tom came home and they established a home in Pittsburgh. Their son Don was born in 1946. In 1951, Tom and Phoebe realized that California would hold better opportunities for their family, so they traveled across country where they eventually settled in Fullerton. In 1960, their daughter Connie was born. They then moved Yorba Linda in 1994. In 2000, after being married for 57 years, Tom went home to be with the Lord. As Phoebe was nearing the age of 90, it was apparent that she needed more care and companionship, so she moved in with her daughter Connie and son-in-law Ted Jackson. Phoebe was diagnosed with cancer in May of 2013. She steadily declined, needing more and more care. In December 2013, our family had the honor of meeting Carol Hubbard, who was a loving and wonderful caregiver to Phoebe. She helped us tirelessly for 5 months, working at Phoebe’s side for many hours during her final days. The family extends our utmost love and thanks to Carol for her devoted care for their mother and grandmother. In addition, Phoebe’s granddaughter, Barbara, who has experience in the medical field, moved home after college, and was there to help her family and grandmother by tenderly caring for her until the very end. Phoebe devoted her life to her family, was a fervent servant of the Lord, and always given to hospitality. She was known as a faithful prayer warrior and portrayed God’s love to others. Just before her death, she quoted to her family her favorite verse: “One thing have I desired of the Lord, that will I seek after; that I may dwell in the house of the Lord all the days of my life, to behold the beauty of the Lord, and to inquire in his temple.” Psalm 27:4. Phoebe is survived by her 3 children and their spouses, 13 grandchildren, 25 great-grandchildren, and 2 great-great grandchildren. She is also survived by her 2 brothers and their wives, 1 sister, and many dear nephews and nieces. In lieu of flowers, the family asks that donations be made to Bible Truth Publishers or Bible Pathways in the name of Phoebe Matthews. The links to connect to their websites are provided on the left side of the page.

Phoebe M. Matthews, 92, went home to be with her beloved Lord and Savior Jesus Christ at her home in Stevenson Ranch, California on May 15, 2014. She was born on February 8, 1922 in Pittsburgh, Pennsylvania to William and Johanna Saint-Vincent.... View Obituary & Service Information

The family of Phoebe M. Matthews created this Life Tributes page to make it easy to share your memories.

Phoebe M. Matthews, 92, went home to be with her beloved Lord...