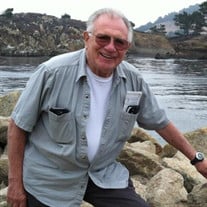 Philip Hancock Williams, a long-time resident of Diamond Bar, passed away at home on Tuesday, November 10th at 4:15 pm. He was 89. Phil was born in Wilkinsburg, Pennsylvania on May 11, 1931 to his parents, Fred and Frances Williams. He lived there for four years until his parents separated and moved with his mother back to her hometown of Harvey, Illinois. It is there that he had many friends and family. He especially enjoyed spending time with his buddies and his cousins. He attended college at Utah State University in Logan, Utah and graduated with a degree in the automotive field. Most importantly, he met the love of his life, Patricia Kirk Hickman in 1952. He graduated in 1953 and joined the Army and left for Fort Knox in Kentucky that same year. They were later married on July 7, 1954 after Pat finished at Utah State. They spent two years in Kentucky until Phil was honorably discharged as 1st Lieutenant and Pat completed her Bachelor’s degree. They settled in Canoga Park, California where Phil was employed at Rocketdyne in the Aerospace industry. It was there that all their four children were born. It was also there that he learned he had two half-sisters and where he later reunited with his father before he died in 1965. He also enjoyed singing in a barbershop quartet. This began his love of singing in groups. He was later employed at Clayton Manufacturing which took the family to Diamond Bar in 1966. He and Pat decided to join Northminster Presbyterian Church in 1968, which enriched their lives with many close friendships and where Phil sang in the choir for many years. The family would enjoy his two week vacations in the summer going camping at such destinations as Shaver Lake, Lassen, Whiskeytown and Bass Lake. After about ten years with a desk job as an Automotive Engineer, Phil decided he was more inclined to work with his hands and made a switch in careers to being a diesel mechanic. He worked for MTA from 1980 to 1997. During that time he took up the hobby of training for and participating in many Triathlons. After his retirement in 1997, he enjoyed the freedom from work commitments that allowed him to be a camp counselor at Calvin Crest among other activities. He later decided in 2004, that a part time job would allow him to work with friendly people who appreciated his ability to fix and organize things. He worked for the City of Diamond Bar and enjoyed his awesome commute until 2012 when he finally retired for the last time. In retirement, he enjoyed traveling to Japan, Missouri, New York, and Pacific Grove. During all this time he loved socializing with friends and his family that by this time included several grandchildren and great-grandchildren. He is survived by his wife, Pat Williams, his sister, Elizabeth Williams Zundel, his children, Diana Williams, Eric (and Nagisa) Williams, Karen (and Brad) Buker, and Shauna Williams. He is also survived by five grandchildren, Aaron (and Kimberly) Windham, Jon Windham, Zack Williams, and Katie and Josh Buker and four great-grandchildren, Jonah and Wesley Windham, and Claire and Evan Windham. There will be a small graveside service held at Memory Garden in Brea, California where he will be interred on December 12, 2020 at 11am. A larger and more casual gathering is being planned for later next year.

Philip Hancock Williams, a long-time resident of Diamond Bar, passed away at home on Tuesday, November 10th at 4:15 pm. He was 89. Phil was born in Wilkinsburg, Pennsylvania on May 11, 1931 to his parents, Fred and Frances Williams. He lived... View Obituary & Service Information

Send flowers to the Williams family.