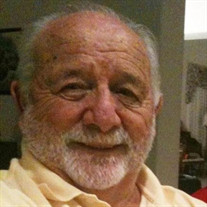 Dr. Leonard Olguin 1925-2019 On Monday, July 29, 2019, Leonard Olguin peacefully slipped his earthly bonds to take his place in eternity, following a long battle with Alzheimer’s Disease. He was 93 years old. Leonard was born on November 20 1925, in San Pedro, CA to Roque and Josephine(Maine) Olguin. He began a career in education by receiving his AA degree from LA City College. He went on to earn his Bachelor of Arts from Cal State LA, and his Doctorate from the University of Southern California. During his distinguished career in education Leonard was asked to go to Washington DC, to develop the national Right to Read program in the 1970s for the Department of Health, Education and Welfare. In 1986 he was inducted into the California School Boards Association Hall of Fame. Dr. Olguin retired from California State University at Long Beach after 22 years as full professor in the College of Education. He is preceded in death by his parents, spouses, Beatrice (Guerrero) Olguin, and Mary Alice (Budinger) Olguin, and four older brothers, Roy, Gus, John, and Alfonso. Leonard is survived by his devoted wife, Darlene Valdez-Olguin, (La Habra, CA), who stayed by his side during his 19-year illness, his six sons, Albert “Lefty”, (Helendale, CA), Gerald, (Port St John, FL), Edward, (Wilmington, CA), Peter, (West Hartford, CT), Patrick, (Whittier, CA), Paul, (Portland, OR), his younger brother, Albert, (Hesperia, CA), Sisters, Esther Riggs, (Pueblo,CO), and Belia Olguin-Smith, (Rancho Palos Verdes, CA), twenty grandchildren, and seven great-grandchildren. Services will be held at 11:00am on August 9, 2019, at St. Angela Merici Catholic Church, in Brea, CA. Viewing will be Wednesday, August 7, from 5-9:00pm, and Memory Gardens Memorial Park and Mortuary, in Brea, CA.Leonard will be interred with military honors at Riverside National Cemetery. In lieu of flowers, donations can be made to the Alzheimer’s Association at www.alz.org.

The family of Leonard Olguin created this Life Tributes page to make it easy to share your memories.

Send flowers to the Olguin family.