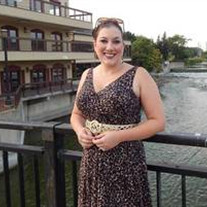 Laura Jean Pearson On Tuesday October 2, 2018, Laura Jean Pearson, mother, wife, daughter, granddaughter, and sister, passed away suddenly and unexpectedly at 34 years of age. Laura was a virtuoso violist who loved performing and teaching. As a session musician she played on the music used in hundreds of movie scores, television shows, video games, and other media. She performed with the Los Angeles Philharmonic, the Hollywood Bowl Orchestra, the Pacific Symphony, and numerous other prestigious orchestras. She was the principal viola of the Chamber Orchestra of the South Bay. She also performed internationally in China, Italy, and Canada. Laura earned her Master’s degree from the University of Southern California, Thornton School of Music, and baccalaureate degrees from Oberlin College and Oberlin Conservatory of Music. She was a 2002 graduate of Wheaton North High School, Wheaton, IL. Laura was actively involved with her local church worship team, enjoyed traveling, was a lifelong learner, and recently began studying to become a yoga instructor. She enjoyed spending quality time with friends and family and was truly relishing her role as mother to Adriana. In addition to her daughter, she is survived by husband Mark Larwill of La Habra, CA; parents Daniel and Diana Pearson of Wheaton, IL; grandparents Joyce Van Vleet of Carol Stream IL, Shirley Pearson and Melvin Hendrickson of Wheaton, IL; sister Susan Anderson (Matt) of Wheaton, IL; and brother Steven Pearson of Oak Park, IL. She was preceded in death by grandfathers Clarence Pearson and David Van Vleet. Laura will be forever remembered by her extended family and friends.

The family of Laura Jean Pearson created this Life Tributes page to make it easy to share your memories.