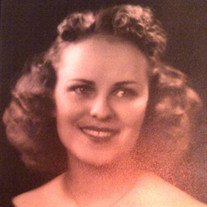 Laura Elizabeth Kendall (Lolly) February 29th, 1924 – August 26th, 2014 Lolly Kendall went home to be with the Lord on August 26th, 2014 at 90 years of age. She was a leap year baby, born in 1924 to Hugh and Pauline Inlow. Lolly was born and raised in Long Beach, California. While a long time resident of Long Beach, she moved to Yorba Linda, California in 1988 with her husband, Hubert Kendall. Lolly is survived by; her daughter, Diane Wink; her baby sister, Jane McCook; her two grand children, Scott Goodale and Natalie Shermak; and her ten great-grandchildren; Lauren Burcombe, Jake, Trent, and Collin Goodale, Jack, Gwendolyn, Ivory, Sophie, Claire, and Ila Shermak. She is pre-deceased by; her son, Doug; her husband, Hube; her five brothers; Hugh Inlow and wife Faye, Dick, John, Bud and wife Arlene, Ed and wife Lois; and her sister, Sue Irvin and her husband Howard. Lolly will be greatly missed by all of her friends and family.

The family of Laura E. Kendall created this Life Tributes page to make it easy to share your memories.