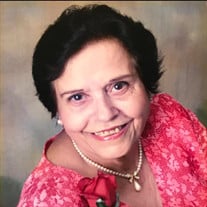 Laura Nassar Ayoub was born on April 10, 1932 to Shaheen and Adele Nassar in the Ashrafieh suburb of Beirut, Lebanon. As the second youngest child among four brothers, she always held a special place in her father’s heart. He often joked that if he had a scale, he would put Laura on one side and all four boys on the other. She attended Atshinak Evangelical School from kindergarten through high school and then Teacher Training School where she received her certification to become a teacher. While studying at Atshinak, on March 26, 1952, Laura and a group of her close friends put their faith in Christ as their Lord and Savior. She was born again as a new creation and spent the rest of her life serving God. After graduating, Laura returned to Atshinak to teach elementary school for five years. On July 6, 1957, she married Christo Ayoub and stopped teaching to dedicate her time to raising her children and serving in the church. Laura and Christo had grown up together. His mother was a well-known seamstress in Lebanon and, when they were young children, Christo would sit next to his mother and sew with her. He once sewed a little coat which he said he made for Laura. From their youth, God was directing Laura’s and Christo’s lives toward one another. A year after their marriage, they welcomed their first daughter, Amal, and three years later they welcomed Mona. Their son, Mounir, and youngest daughter, Carol, followed. In 1976, after the Lebanese Civil War began, Laura and her family relocated to Orange County, California. Laura and Christo joined Grace Bible Chapel where Laura spent her time teaching Sunday School for young children. In 2003, they opened their home to weekly meetings with members of the church where Laura hosted congregants and cared for their children while they fellowshipped together. Laura’s passion for teaching, serving, and hosting touched everyone she met. She was a longstanding member of the Orange County Christian Women’s Club for over 20 years where she hosted board meetings in her home, found baby sitters for young mothers, and baked delicious Lebanese desserts for fundraisers. Her dedication to serving and glorifying God impacted even strangers. Laura also supported her husband, Christo, in his ministry and evangelical work. He relied on her to proofread every issue of his magazine, Remember Your Creator, which evangelized and encouraged readers in both English and Arabic, before it would be sent out. Laura made it clear that her house would be open to anyone in need and her goal was to serve her family and brothers and sisters in Christ. She was also a notorious prayer warrior who inspired and encouraged others in their faith. Everything Laura did, she did for the glory of God. Serving her family and the church was Laura’s number one priority. Her selflessness and generosity were an example to everyone. Her attitude was always bright and optimistic, her smile infectious, no matter the circumstance. She was quick to laugh and quick to make even the heaviest of hearts lighter whether through a joke, an encouraging word, or food. Laura’s cooking skills were famous among all who had the pleasure of sampling her food and she never grew tired of hosting God's servants, friends, family, and strangers. She brought people together with food and served them with joy. When she wasn’t cooking, she could be found reading autobiographies, Christian books, and the local newspaper. Although she rarely had time to watch television, when she did, she would make sure to stay informed on current events and filled her time with Christian television programs. Above all, her faith and commitment to serving others remained strong even through her last days. She evangelized nurses and doctors any chance she could and was always the perfect host. Laura is survived by her husband Christo, her two daughters Amal Boland and Carol Sfeir, her daughter Mona and her husband Kamil Antonios and their three children Christine, Joseph, and Caitlin and Laura's son Mounir and his wife Antoinette and their children Christopher, Ryan and Matthew. Through God’s goodness and mercy, we rest assured we will see Laura again in Heaven, rejoicing at the feet of her Savior Jesus Christ forever.

Laura Nassar Ayoub was born on April 10, 1932 to Shaheen and Adele Nassar in the Ashrafieh suburb of Beirut, Lebanon. As the second youngest child among four brothers, she always held a special place in her father&#8217;s heart. He often joked... View Obituary & Service Information

The family of Laura Nassar Ayoub created this Life Tributes page to make it easy to share your memories.

Send flowers to the Ayoub family.