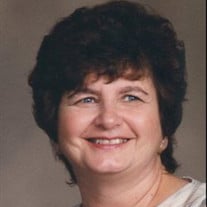 Kay Eileen Hovey August 24, 1940–September 19, 2017 On September 19 2017, Kay Eileen Hovey succumbed to a head injury caused by a fall the previous day. She was surrounded by family as she passed away. Born on a train in Eagle County, Colorado, Kay Eileen Peterson was the second of five children and only daughter of Raymond Peterson and Mildred Hockett Peterson. Kay grew up in Norwalk, California, where she met her husband of 60 years, Grant Hovey. Together they settled in La Habra, California, and raised four children: Thomas Alan, Diana Lynn, Roger Mark and Brian Ray. Kay excelled at being a mother. She led Cub Scouts and Girl Scouts and opened her home and heart to all. She worked as a secretary in a furniture company for 15 years before retiring. Family was Kay’s priority. She and Grant traveled frequently to visit Diana’s family in Texas and New York, as well as her other children in San Diego. They enjoyed trips to research family genealogy. Kay and Grant exemplified hospitality. She opened her doors to all, becoming a motherly figure to many of her children’s friends and later her grandchildren’s friends. She hosted Sunday family dinners for nephews Gordon and Doug and continued as more family moved to Southern California. Kay was at every one of the frequent family dinners now hosted by the younger generation. Last year, Kay and Grant joined 26 family members on a Disney Cruise to Alaska. Kay delighted in bestowing her love on others. For years, Kay sent birthday cards, on time, to every friend and family member known. The volume of this project made her a platinum-level member of the local Hallmark store. An avid sports fan, she would crochet blankets while watching Angels baseball games at home. She sent blankets to her grandchildren at college to give to their grateful friends. Gramma Kay’s blankets now stretch from California to New York and around the world. Kay was preceded in death by her son Brian Ray Hovey; her brother David Peterson; and her parents, Raymond and Mildred Peterson. She is survived by her husband, Grant Forsgren Hovey; her brothers Alan (and Esther), John and Randy Peterson, and her brothers-in-law, Chuck and Dwight Hovey; her three children Thomas (and Tracey) Hovey, Diana (and Mark) D’Evelyn, and Roger (and Lori Changala) Hovey; her six grandchildren, Sean (and Charlotte) D’Evelyn, Katherine (and Joshua) Conlon, Heather (and Thomas) Kjolsing, Paul Hovey, Samantha (and Rafael Eaton) Hovey, and Rebecca Hovey; and her five great-grandchildren, Liam and Micah D’Evelyn and Maya, Naomi and Logan Conlon.

Kay Eileen Hovey August 24, 1940&#8211;September 19, 2017 On September 19 2017, Kay Eileen Hovey succumbed to a head injury caused by a fall the previous day. She was surrounded by family as she passed away. Born on a train in Eagle County,... View Obituary & Service Information

The family of Kay Eileen Hovey created this Life Tributes page to make it easy to share your memories.