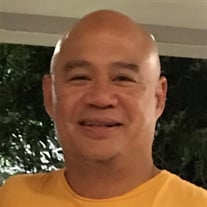 Juancho Rey Ramirez Sangueza January 15, 1966 – December 06, 2019 of Anaheim Hills, California was called to eternal rest at the age of 53. In his new life, Rey will be met at the gates of Heaven by his Grandparents: Damaso and Remedios Sangueza and Anastacio and Florentina Ramirez Parents-in-law: Mercurio and Anecia Calma Auntie and Uncles: Rosita Ramirez Deveraturda, Napaleon Ramirez, Leonardo Ramirez, Jose Ramirez, and Nario Sangueza His love and memories will be cherished in the hearts of his Wife: Maricel G. Calma Children: James Romeo Sangueza, Jessica Riley Sangueza, and Jacob Ryan Sangueza Parents: Romeo “Sam” and Corazon Sangueza Sisters and Spouse: Cheryl Sangueza, Cora and Ron Brown (Jasmine and Zena), and Charlyn and Daryl Haun Brothers and Sisters-in-law: Peter Calma, Michael and Lulu Calma, Manuel and Virginia Calma, Madeline Velasco, and Wendy Lou and Joseph Darwin Capacite. He is additionally survived by numerous aunts, uncle, cousins, nieces, relatives, and friends throughout U.S., Guam, and the Philippines. Rey was the devoted husband of Maricel and the loving father of James Romeo, Jessica Riley, and Jacob Ryan. He was a dedicated family man who adored every moment shared with his wife and kids. Rey consistently carved out time to enjoy dates with Maricel. Rey could easily been seen in the backyard with his kids, at James’ basketball, football, and soccer games, at Jessica’s gymnastic practices, or role playing a variety of action hero scenarios with Jacob. Rey enjoyed taking the family to the park, carting the kids around Target and playing with toys in the aisle, and FaceTiming with his family on Guam with his kids climbing all over him. Rey was also a thoughtful, generous, fun, and kind son, brother, uncle, and cousin. Memories of Rey include his inability to keep still, his balance of being serious yet humorous, and his skill of using analogies when telling a story. His thoughtfulness and generosity have touched us all, in many different ways and throughout the years. Rey was an Electrical Consulting Engineer at IMEG. He managed projects and people. He was strict yet understanding. Co-workers and friends shared: I will always cherish and am grateful for everything he did for me here in the office and as a friend…Rey was a good friend and loved by so many of us. Rey will be missed more than words can express. We love you, Rey.

Juancho Rey Ramirez Sangueza January 15, 1966 &#8211; December 06, 2019 of Anaheim Hills, California was called to eternal rest at the age of 53. In his new life, Rey will be met at the gates of Heaven by his Grandparents: Damaso and Remedios... View Obituary & Service Information

The family of Juancho Rey Ramirez Sangueza created this Life Tributes page to make it easy to share your memories.