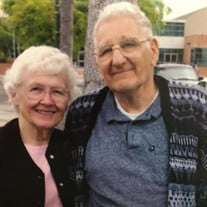 In loving memory of our parents, Joseph "Joe" P. Cisternino and Barbara Ann Cisternino, a Funeral Mass will be held on Tuesday, June 15, 2021 – on what would have been their 64th wedding anniversary – at Beatitudes of Our Lord Catholic Church in La Mirada, California. They were long-time residents of La Habra, California. Joseph passed away on April 9, 2021 in Whittier, California, after a short illness. He was preceded in death by his loving wife, Barbara, who passed away on Feb. 11, 2013, at home in La Habra. Joe was born in Plainfield, New Jersey, on May 22, 1930, to James and Frances Cisternino, who came to the United States from Italy through Ellis Island. After high school, Joe joined the Navy and was a Machinist Mate 3 during the Korean War. Upon his discharge from the Navy, he moved to California with his best friend. Barbara was born in Perry, Oklahoma, on Jan. 15, 1935, to Lonzo and Halley Grant. She moved to California in 1938 with her family. Her parents later returned to Oklahoma. Joe's and Barbara’s love story began when they met while Barbara was completing her student nursing at California Lutheran Hospital in Los Angeles and Joe was worked in the physical plant department. Barbara would sneak him chocolate ice cream. They were married on June 15, 1957. Their daughter, Catherine, was born in January 1960 and their son, Christopher Paul, was born in June 1961. The Federal Reserve Bank in Los Angeles employed Joe as a maintenance engineer, prior to retirement. He liked to tell people that he “burned money” for a living. During his retirement, he was employed by Downey Savings as a maintenance engineer, and later the Lowell Joint School District as a substitute custodian. For many years a prolific gardener in his spare time, Joe would provide the neighborhood with a variety of vegetables – especially zucchini, which he grew in great abundance. Barbara was a registered nurse by trade and training. She worked at Presbyterian Inter-Community Hospital for many years, helped to open their Diabetic Care Unit and was the first diabetic teaching nurse at PIH. She left PIH to become a pharmaceutical rep for LifeScan, from which she received many awards and commendations. In her spare time, Barbara became a Eucharistic Minister and a member of the RCIA team at Beatitudes; she would also freeze and can those vegetables Joe grew. Joe and Barbara were long time members of Beatitudes of Our Lord Catholic Church. They were also members of the Rounders, a square dance club. They loved to entertain their friends and family members, and Barbara was known for her lasagna, which Joe took credit for since it was based on his mother's recipe. They loved to travel, taking their children on many road trips across the U.S. to visit family and friends. They also enjoyed going on cruises. Barbara was preceded in death by her parents, and a brother, Johnny Lee. Joe was preceded by his parents, and a sister, Annie. They are survived by their children, Catherine and husband Andrew of Salinas, California; Christopher and wife Kim, of Tahlequah, Oklahoma; and their grandchildren, Cole and Hannah, whom they loved deeply. Joe is also survived by a brother, John, of Florida. After the Mass, Joe and Barbara will be interned at the Veterans National Cemetery in Riverside, California. Arrangements were made through Garden of Memories Mortuary

In loving memory of our parents, Joseph "Joe" P. Cisternino and Barbara Ann Cisternino, a Funeral Mass will be held on Tuesday, June 15, 2021 &#8211; on what would have been their 64th wedding anniversary &#8211; at Beatitudes of Our Lord Catholic... View Obituary & Service Information

The family of Joseph Cisternino created this Life Tributes page to make it easy to share your memories.

In loving memory of our parents, Joseph &quot;Joe&quot; P. Cisternino and
Barbara...

Send flowers to the Cisternino family.