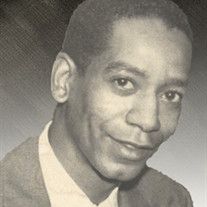 John Irwin Adkins, Sr. was born on August 1, 1925, to Percy I. Adkins and Mattie L. (Thomas) Adkins. John, affectionately called “Butter” or “Tuffy”, attended and received his education in Chicago Public Schools at Nicholas Copernicus Elementary and Lindblom High School (class of June 1943). He served in the military during World War II and received an honorable discharge from military service on May 3, 1946. In June 1948, he married the love of his life, Dorothy Ruth Taylor, who preceded him in death. To this union three children were born: John I. Adkins, Jr., Diane M. Burrell, and Sharon A. Adkins. John was employed by Kellogg Switchboard as an Assembler. Kellogg quickly recognized his potential and promoted him to a management position in the early 1950’s. When Kellogg relocated out of state, he gained employment with the United States Postal Service. Again his enormous talents and skills were immediately acknowledged and he advanced into a management position. John believed in hard work and providing the absolute best for his family. While working at the Post Office, he earned his real estate license and started Adkins Realty Company. He joined Ingleside Whitfield Methodist Church on April 14, 1963. John was an avid golfer, sports aficionado and loved music, especially jazz. In August 1986, John and Dorothy relocated to sunny California. John crossed over and made his transition on December 28, 2013, in Fullerton, CA. Among those who loved and will cherish his memory are his children John I. (Leslie), Diane (David) and Sharon; his grandchildren: Delena, Christopher, Deanna, Lenore and Philip, and a host of nieces, nephews, great nieces and nephews, cousins, relatives and friends.

The family of John Adkins created this Life Tributes page to make it easy to share your memories.

Send flowers to the Adkins family.