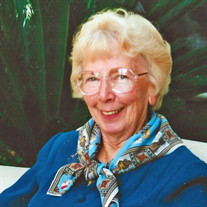 Joan Francis Hosek was born in 1931 to Lydia and Joseph Hosek, the seventh of nine siblings and one of six daughters. Just as some of her older sisters, Joan attended Lourdes High School, where she learned secretarial skills. She worked during high school and after at Dakota Transfer and Storage. Her secretarial career led her to jobs in advertising and sales promotion departments at several companies before joining ARCO Oil and Gas in Harvey, Illinois. The love of Joan’s life was John Kudla, who died of congestive heart failure in 1978. In 1987, Joan transferred to the ARCO facility in Anaheim. She and her sister, Mary, both widows, became “roommates” and eventually purchased a home together. Joan retired from ARCO in 1995. Joan was a faithful, spiritual woman, whose special passion was the pro-life movement. She spent 20 years praying and counseling at an abortion clinic, encouraging women not to abort their unborn children. More than 700 women told Joan they changed their minds and let their babies live after speaking with her and her colleagues. She was an active parishioner at St. Angela Merici Catholic Church in Brea, participating in prayer circles and pro-life events. Particularly devoted to the Blessed Mother, Joan traveled to Medjugorje, Bosnia-Hercegovina, to encounter the place and people of the town where a group of young people reported visions of Mary and her messages. For 20 years, Joan served on the organizing committee for the Medjugorje Peace Conference held in Irvine, an event that drew 5,000 people annually for prayer, song, speakers, and testimonies. For Joan, the family was a sacred bond. She relished relationships with her sisters and brothers, their children and grandchildren, providing support during difficult times for many. A sideline was her beautician training, offering her talents to her mother, Lydia, as well as sisters and friends. Stalwart and principled, Joan’s eyes often held a twinkle that suggested her humorous side. Joan endeavored to conduct her life by the guidance of Pope Jon XXIII: “Do not walk through time without leaving worthy evidence of your passage.”

Joan Francis Hosek was born in 1931 to Lydia and Joseph Hosek, the seventh of nine siblings and one of six daughters. Just as some of her older sisters, Joan attended Lourdes High School, where she learned secretarial skills. She worked during... View Obituary & Service Information

The family of Joan Francis Hosek created this Life Tributes page to make it easy to share your memories.

Joan Francis Hosek was born in 1931 to Lydia and Joseph Hosek,...

Send flowers to the Hosek family.