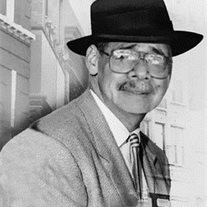 La Habra — Jesus "Jess" Arrieta, 86, went to be with our Lord on Saturday, January 14, 2017, at home surrounded by family, following a difficult illness. Jess was born on October 22, 1930, in El Paso Texas, to Norberto and Flora (Enojos) Arrieta. He was the beloved brother to Johnny, Olga, Raul, Stella, Robert, Hector, and Maria. Jess grew up on a ranch in Texas, where he loved to sing and dance, and also learned to box. As a young man, he became an amateur lightweight boxer; known as "The El Paso Kid." At 16 years old, he moved to Los Angeles, California. Shortly after, he met his future wife, Irene Carmel Smith. They fell in love and were married in 1951. They raised their four children in Norwalk, CA where Jess worked and went to school to become a licensed Plumber. They then moved and settled in La Habra in 1971. Jess worked for the Union for over forty years, perfecting his craft and mentoring many along the way. He was always the man for the job. Jess also had a love and talent for playing pool and bowling. He won countless trophies in both. Jess and Irene loved to dance and entertain family and friends; their door was always open. After retiring, Jess developed a love for golfing and was able to spend more time with his family. He was especially passionate about his grandchildren and never missed an opportunity to attend “Grandparent’s Day.” In his later years, he could be found relaxing in his “Man Cave,” indulging in Westerns and supporting his beloved Dodgers. He is survived by his beautiful wife of 65 years, Irene Arrieta; his four children, Linda Rene, Anthony, Olga and Ruby; eight grandchildren; and nine great-grandchildren. His legacy will be shared for many years to come, by all who knew him. We will miss you dearly Papa; The Man, the Myth, the Legend.

The family of Jesus Arrieta created this Life Tributes page to make it easy to share your memories.

Send flowers to the Arrieta family.