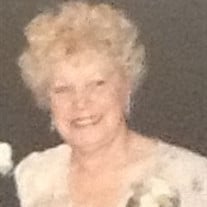 Biography Jean Melcosky (Evanowich) Jean Melcosky passed away on February 7, 2017after a lengthy illness. She was born on February 6, 1930. She was predeceased by her husband, Steve, in December 2016 and by her parents Jack Evanowich and Mary (Kuldiak). Jean or Aunty Jean as she was more affectionately known by her numerous nieces and nephews grew up in a rural and somewhat isolated area of Manitoba, Canada. In her mid teens Jean left her parents and younger sisters and brothers behind on the farm and she moved to Winnipeg. There she took a business/accounting course which led to her first paying job in Winnipeg. A short time later she met Steve and they were married in Winnipeg on June 13, 1953 at St. Vladimir and Olga Church. They moved to Toronto shortly after they were married. In a couple of years they moved to Oakland, California. After a few moves in the area they settled in Kenrich Court and then in their home on Drury Drive. In California, Aunty Jean became a Real Estate Agent. She enjoyed her work with people. After a brief period her husband joined her as an agent. They worked together in sales. For many years they enjoyed the companionship of their two dogs, Lucky and Snoopy. They were so fond of them that their car's license plate bears their names. Aunt Jean and her husband led busy lives. During this time they had acquired several properties that needed regular maintenance and service. Eventually they phased away from sales. They encouraged many family members to visit them and to enjoy the California weather. They took pleasure in taking people on tours to the many attractions in the area. They spent numerous weekends at their cabin in Yucca Valley and later at their condo in Palm Springs. These were happy events. In the past several years her illness overtook her health. Her devoted husband comforted her and patiently attended to her. Her need for assistance grew. Marta, her housekeeper for many years, took on more tasks around the house. She was always there when they needed help. Her patience was incredible. She provided warmth and attention to create a pleasant atmosphere and a clean and comfortable home. More caregivers were eventually phased in to meet Aunt Jean's needs. On behalf of family and friends we thank Marta for her kindness and personal attention toward Aunt Jean. Our thanks are extended to the caregivers that were there for her, especially Virgie Kohel. We couldn’t have asked for better people to look after auntie (and uncle). Yes her life has witnessed a huge transformation from the isolated farm to the bustling city in sunny California. But Love always flourished. Now her spirit is united once again with Uncle Steve and it will continue to eternity. You leave behind many treasured memories. Our prayers are with you. God Bless You.

Biography Jean Melcosky (Evanowich) Jean Melcosky passed away on February 7, 2017after a lengthy illness. She was born on February 6, 1930. She was predeceased by her husband, Steve, in December 2016 and by her parents Jack Evanowich and... View Obituary & Service Information

The family of Jeanie Melcosky created this Life Tributes page to make it easy to share your memories.

Send flowers to the Melcosky family.