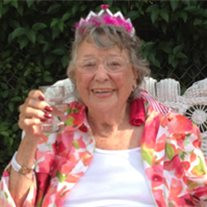 Hazel D Dalton August 14, 1912 - January 4, 2013 Hazel was born in Naples, South Dakota on August 14, 1912. She was one of six children. Traveling in a Model T, Hazel at the age of 17, along with part of her family moved to California. With a mattress strapped to the top of the Model T, and working along the way, it took them 3 months to reach California. Hazel graduated from Garfield High School, East, Los Angeles, in June 1932. She met her husband-to-be, Bill Dalton, on a blind date and they were married in June, 1933. They moved to Lynwood in 1950. Hazel and bill's fourth child, Laurie, was born in Fullerton in 1952. No matter which home Hazel lovingly cared for, she always made time to be involved in church activities and programs to which her children were connected. She prepared many church banquets, coordinated weddings, and serviced in a number of ways at the church, and she even sang in the choir! Hazel and Bill were instrumental in the formation of Temple Baptist Church in Fullerton, and even held many of the First church services in their backyard! There was an "Open Door" policy at the Dalton home for people around the world who needed a place to eat and sleep. Some stayed for a month or two, others as long as six years, because they knew they were always welcomed and were a part of the "Dalton Gang" Hazel and Bill were world travelers and visited locations such as Italy, where in 1960 Olympics were being held in Rome. They also traveled to Mexico, Australia, South America, Greece Norway, Hawaii, and Japan. Most summers were spent at the family cabin in Big Bear, where Hazel often "out-fished” Bill! Also, they took many road trips, pulling their trailer to many beautiful fishing spots! In 1989 Hazel and Bill moved to Brea, CA. and were still very active in their semi-retirement years. Bill passed away in 2009 at the age of 97. They were married for 75 Years! Hazel joyfully celebrated her 100 Birthday in August of 2012. She still reached out to others by making quilts for the sick children at CHOC Hospital and providing books for their library! Hazel is survived by her children, Phyllis Fender of Fullerton, Dough Dalton of San Luis Obispo, Trish Hale of Grass Valley, and Laurie Dalton of Los Angeles; and sister, Maybelle Collegeman of Bend, Oregon. A Memorial service will be held of Hazel on Saturday, Jan. 12th at 2:00p.m. at temple Baptist church, 1601 W. Malvern Ave., in Fullerton. In lieu of flowers please make donations in Hazel's name, to CHOC Hospital 455 South Main St., Orange, CA. 92868

The family of Hazel Dorthea Dalton created this Life Tributes page to make it easy to share your memories.