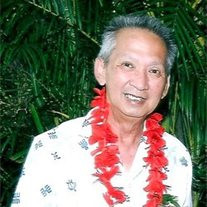 Biography Guillermo “Junne” Romero, 64, of Diamond Bar, California, passed away peacefully on Sunday surrounded by his wife and children. A prayer vigil will be held on Thursday, February 21,2013 at 7:15 pm at St. Denis Catholic Church located at 2151 S. Diamond Bar Blvd. Diamond Bar, CA 91765. A memorial mass will be held on Friday, February 22, 2013 at 10:00 am at St. Denis Church. Junne was born in Manila, Philippines on June 19, 1948. He graduated from Paco Catholic High School and continued to receive dual Bachelor degrees in Liberal Arts and Sciences, majoring in Accounting and History-Political Science from De La Salle University in Manila in 1970. Junne was married to Mary Domondon-Romero on April 27, 1974. They were married for 39 years. Fresh out of college, Junne worked with the Bank of Philippine Islands both in the Philippines and in Hongkong from 1970 until 1986. He migrated with his family to the United States in 1987. Junne enjoyed music, poetry, photography and writing. He enjoyed spending his leisure hours with his family especially with his very young grandchildren. Junne is survived by his spouse Mary (Bebbs), children (Christine and Melvin, Al Vincent and Linda, Angelo and Nicole), grandchildren (Abigail, Rosalind and Valkyrie), sister Alice, brothers (Francisco, Miguel, and Danilo) and other family members and friends. Junne is preceded in death by his parents Guillermo and Perfecta Romero, brother Ruben and sister Grace. In lieu of flowers memorial donations may be made to Catholic Charities San Gabriel Region.

Biography Guillermo &#8220;Junne&#8221; Romero, 64, of Diamond Bar, California, passed away peacefully on Sunday surrounded by his wife and children. A prayer vigil will be held on Thursday, February 21,2013 at 7:15 pm at St. Denis Catholic... View Obituary & Service Information

The family of Guillermo G Romero created this Life Tributes page to make it easy to share your memories.