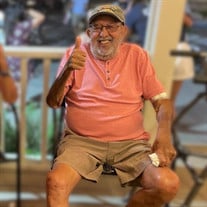 Gerald “Gerry” Viera, a long time La Habra resident, passed away on February 26, 2022 at the age of 78. Gerardo Alconero Viera was born on April 17, 1943 in San Luis Potosi, Mexico to Isabel Alconero Viera, from Santander, Spain and Jose Salomon Viera from San Luis Potosi. He was raised with his siblings Fernando, Jose, Salomon and Margarita in Mexico until they moved to Mission Bay, San Diego. Growing up near the beach was something that impacted Gerry so much that while he battled his many illnesses, including dementia, he often reminisced about running along the beaches of San Diego. And as his legs were failing, he would share how he yearned to feel the wet sand on his feet again. After getting settled in San Diego, Gerry attended St. Jude Academy and then Mission Bay High School. Gerry and his brothers lost both their parents very young (Gerry was 8 when he lost his Dad and 12 when he lost his mom). While in high school Gerry wanted to play sports but he was not allowed since he was a ward of the state. However, he turned 18 in his senior year and was able to run track and did quite well! After graduation, he and his 2 friends drove to Alaska in a 1944 Ford pickup truck that they worked on in Auto Shop class. They spent about 3 weeks exploring Anchorage and McKinley National Park (now Denali). Upon his return to San Diego, Gerry enlisted into the army where he was very lucky to have been stationed in Korea and Washington during the Vietnam War. Gerry and his newlywed wife, Helen ventured out to Orange County where they purchased their home in La Habra. Gerry worked as a machinist then eventually continued his career at the Department of Water and Power in Los Angeles for 30 years. He also coached soccer at St. Paul High School. In addition, he volunteered as a soccer coach at AYSO in La Habra where he taught and mentored his children and grandchildren and countless others who were lucky enough to call him “Coach”. He also volunteered as a basketball coach at the La Habra Boys and Girls Club. He stayed “retired” for a short time and then worked for the La Habra Parks and Rec Department. Gerry is survived by his loving wife, of almost 55 years, Helen Viera; his children Amor (Anthony) Pluma, Yvonne (Ben) Johnson, Desiree (Aaron) Kelly and Juan (Rose) Viera as well as 17 grandchildren. He is also survived by 2 brothers, Frank Viera and Jose Viera and MANY nieces and nephews! He was preceded in passing by his parents, brother Salomon and sister, Margarita. Gerry was the ultimate family man with the silliest jokes and he will forever be missed. Rosary and Visitation will be Friday, March 18 th 2:30-5:00 Funeral Mass will be Saturday, March 19 th at 10:00 am Burial Service will be Saturday, March 19 th at 1:00 pm with a Joyful Celebration of Life following in Garden Grove (Maps will be handed out at services)

The family of Gerald "Gerry" Viera created this Life Tributes page to make it easy to share your memories.

Send flowers to the Viera family.