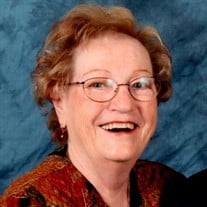 Esther May (Weaver) Poling was born September 23, 1929, in Allen County, Indiana. She grew up on an 80-acre farm, in a white house on a country road with a woodburning stove and a Lilac bush outside her bedroom window. She mended clothes for... View Obituary & Service Information

family and friends may join us virtually by joining our Zoom meeting Zoom.com meeting 876 9792 5155 password maxsgal

Send flowers to the Poling family.