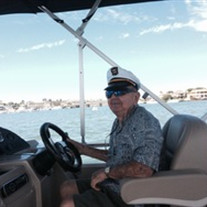 Edward William Hess Sr., 87, died Monday, March 28, 2016, after a brief illness. He is survived by his beloved wife, Mary Elizabeth (Bette) Oustalet, and his eight children: Edward Jr.(Elvia),Michelle (Leigh) ,Terry(Meredith), Jimmy, Michael (Liz), Mae, Willie, and Alexander (Amelia). He is also survived by his dear grandchildren: Chelsea, Forrest, Angela, Catherine, Alicia, Miguel, Billy, and Michael; his nieces and nephews, Mary, William, Lucy, John, Claire, and James Hess; Evelyn, Thomas, Sue, Peggy and Stephen Hale; John Thomas, and Lorie Oustalet. He was a graduate of Jesuit High School (New Orleans), entered college at the age of 15, and graduated from Tulane University (New Orleans) with a degree in chemistry. He worked his entire career at Hunt Wesson. Ed was also a retired Captain in the National Guard. As a devoted member of St. Angela Merici Catholic Church in Brea, CA, he served as Head Usher for many years, attended daily Mass ,and could be seen regularly at Sunday 9:30 Mass, and weekly Adoration. He was preceded in death by his dearest brother, William Jacob Hess Jr. (Carolyn Drumm Hess), and his best friend, Frank Fenerty. He will always be known for his crew cut, the "Friday Night Fights", his cooking, his love of food, anything New Orleans, and his wonderful sense of humor. He was married and devoted to his wife Bette for 64 years. The two of them loved to cook and entertain their friends. He was known as the resident photographer to Bette's Bunco Group, as well as any festive occasions. He will be greatly missed.

The family of Edward William Hess created this Life Tributes page to make it easy to share your memories.