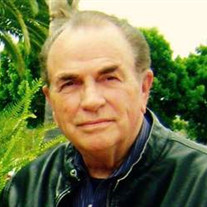 William, "Dudley" Walls, 80 passed away peacefully surrounded by his loving family on Sunday October 8th, 2017. Dudley was born July 5, 1937 in San Antonio Texas, the only child of Herbert and Mary Walls who proceeded him in death. He spent all his youth in Texas where he was surrounded by many Aunts, Uncles and cousins, so he never really was an only child. Once graduating High School, he went on to Texas A & M where he received his degree in Mechanical engineering. He moved to Northern California in 1964 where he worked for a large Aerospace Company that was involved in the early Apollo Missions and loved how technology and space were the new frontier. Dudley's career took him on a pathway of learning and growing and developing incredible leadership abilities where he was able to excel in most everything he did. Following a long corporate career, he entered real estate in 1974 in Hacienda Heights, Calif. He went on to become a Broker and opened the first "Re max" office in California in 1976 and retired in 2005. Dudley was preceded in death by his beautiful wife ("Angel") Diana and is survived by his children, Wyndy Ricketts of San Antonio TX, Tami Walls, of Chino Hills CA, Juanita "Beau" Donegan, Montara CA, Daniel Walls and wife Lori, Diamond Bar CA, stepchildren Eric Freyre and wife Lucy of Diamond Bar CA, and Sharron (deceased), 12 grandchildren and 12 great grandchildren. Dudley was a gentle giant, a true man of integrity, who viewed the world from a place of love and harmony and a strong faith in the goodness of mankind. He treasured every relationship for it brought him great comfort to love and be loved in return. He was an incredible father, grandfather, great-grandfather, loving and devoted husband to Diana, and will be missed by all who had the privilege of knowing this beautiful soul! Dance with your Diana and the Angels above.

William, "Dudley" Walls, 80 passed away peacefully surrounded by his loving family on Sunday October 8th, 2017. Dudley was born July 5, 1937 in San Antonio Texas, the only child of Herbert and Mary Walls who proceeded him in death. He spent... View Obituary & Service Information

The family of Dudley Walls created this Life Tributes page to make it easy to share your memories.

Send flowers to the Walls family.