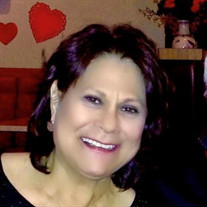 Dora Tejeda, 68, was born on February 29, 1952 in Guatemala City, Guatemala and passed away on January 29,2021 in Brea, California Dora was born in Guatemala and at the age of 10, in 1962, her family came to the United States and settled in Southern California. After graduating from Santa Fe Springs High, she would meet her husband Manuel, and they married in 1971. They would have 2 daughters, Sonia and Jessica, in their 30 years of marriage, before divorcing in 2001. Dora didn’t settle into the traditional role of housewife and took pride in her amazing accomplishments in the banking world. It was a profession she would be in for over 35 years. Dora took her love for lovely nails and went to nail technician school, graduating in 1985. She would proudly help family and friends, and was known for always having people over to do their nails. She enjoyed traveling going on cruises, taking a special trip to Europe with her mother and sister. She enjoyed gardening, a fashion trip to Nordstrom’s, and a good slot machine. Dora had many accomplishments in her life including gaining her citizenship in 1994.She always loved that her birthday was a leap year day, so “officially” only celebrated every 4 years. Her pride and joy, biggest accomplishment if you asked her, would be having her two daughters Sonia and Jessica. Dora will always be known for her stunning beauty, the ability to make people feel special, and a contagious larger than life laugh. She will be missed by many and her memory will live on. Dora is survived by her two daughters Sonia Perez and Jessica Nettles, her two son-in-law’s Benjamin Perez and Brian Nettles, and her two grandchildren, her father Carlos Ruiz, and her sisters Blanca Hanson, Gloria Scoma, Carmen Garamendi and Ninette Deyoung. She was a beloved aunt to many nieces and nephews. She is preceded in death by her mother Maria Small, and her brother Robert Ruiz. We would like to take a moment to thank the many families and friends who have reached out, sent flowers, cards and messages. The sudden death of our mother has been painful, but to see how loved she was has been such a blessing. Dora will be remembered on March 12, 2021 at 2:00 pm at Memory Garden Memorial Park in Brea

Dora Tejeda, 68, was born on February 29, 1952 in Guatemala City, Guatemala and passed away on January 29,2021 in Brea, California Dora was born in Guatemala and at the age of 10, in 1962, her family came to the United States and settled in... View Obituary & Service Information

The family of Dora Tejeda created this Life Tributes page to make it easy to share your memories.

Send flowers to the Tejeda family.