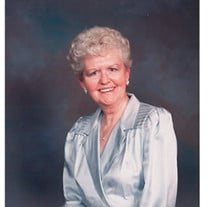 Born on May 10, 1929 in Butte, Montana, Donna Marie (Driscoll) Morrow passed away on September 18, 2014, in Brea, Calif. Donna grew up in Butte and graduated from Butte High School in 1947. She went on to study at Carroll College in Helena, Mont., where she earned her registered nursing degree in 1950. Donna’s first job as an RN was at St. James Hospital in Butte. She moved to southern California in 1951, where she reunited with some of her classmates from Carroll College and continued her nursing career. In 1956, Donna married Eugene D. Morrow and became a homemaker for many years as their three children were growing up in Brea, Calif. Donna returned to health care in 1974 as an on-site nurse for Kern Foods, before moving on to a similar position for 10 years at Miller Brewing Company (1979-89). After retiring, Donna served as an occasional relief nurse for various companies in southern California, although traveling became her favorite pastime. Along with returning every summer to her beloved Montana to visit relatives, she saw much of the world, usually in the company of her inseparable cousin Jo Erickson and her husband Woody. Intensely proud of her Irish ancestry, Donna was always happiest hosting holiday and birthday parties for the four generations of her family. She loved it when happy noise and laughter filled her home. And those closest to her know that she never met a slot machine that she didn’t like. Predeceased by her parents Thomas J. and Zita (McGovern) Driscoll, and brother Thomas M. Driscoll, Donna is survived by her children Michael (Mary) Morrow, Cathleen (Nick) Salata and Cynthia Morrow, grandchildren Eric (Jee) Blackwell, Christopher Morrow, Caitlin Salata and Kevin Salata, and great-grandchildren Owen and Allen Blackwell. She is also survived by numerous nieces, nephews and cousins. Funeral mass will be celebrated on Thursday, Sept. 25, 1 p.m. at St. Angela Merici Catholic Church, 585 S. Walnut St., Brea, Calif., 92821.

Born on May 10, 1929 in Butte, Montana, Donna Marie (Driscoll) Morrow passed away on September 18, 2014, in Brea, Calif. Donna grew up in Butte and graduated from Butte High School in 1947. She went on to study at Carroll College in Helena,... View Obituary & Service Information

The family of Donna D. Morrow created this Life Tributes page to make it easy to share your memories.