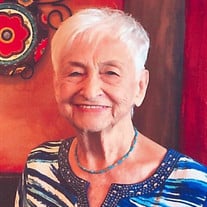 Claire Ann Spothelfer (Davis) passed away on the morning of Wednesday, February 12, 2020 surrounded by her loving family. Claire was born on September 21,1934 in the Willowbrook neighborhood of Compton, California to Millard and Doris Davis. She was the second of five children and is preceded by her two brothers Gary and Randy, and survived by her two sisters, Doreen and Geraldine. After graduating from high school, Claire enjoyed working as a medical assistant until her marriage to the love of her life, Paul Spothelfer on July 1, 1962, in a Hollywood church that Paul helped build. Even though Claire and Paul actually grew up two blocks from each other, they finally met on a blind date, introduced by their respective best friends, and often Claire professed she knew it was love at first sight. Together they raised daughter, Heidi, and son, Darren, who is happily married to his wife Christine. Claire often spoke of her pride of her children and their accomplishments. In 1967 the family moved to Downey, California and lived there for 12 years. During that time, Claire not only was very involved in her children’s sports and activities, she also joined the PTA and volunteered countless hours in charity organizations such as City of Hope, Children’s Hospital, and The Kidney Foundation. In 1982 the family moved to La Habra Heights where Claire and Paul became immediately and deeply involved in the close-knit community. Claire joined the Improvement Association, and in 1988 she implemented the La Habra Heights Music in the Park program, which she continued to organize and run for 22 years. This, she quotes as her most proud civic accomplishment. Claire and Paul’s dedication to this program over the years continues to be revered by many in the community. In 1996 Claire sat on the La Habra Heights City Council and also served as Mayor from 1999 to 2000. One of her best friends is quoted as saying “when Claire decided to do something for the Heights, she would gather her friends and it would be done. She dearly loved the Heights, and in turn the Heights loved her.” Just as her mother had a thimble collection, Claire also became a collector of many unique things over the years, from antiques to paperweights. She especially loved Christmas, and was well known for her most impressive Santa Claus collection, which was even featured in a local museum. Claire was fond of sunny weather and she and Paul shared many trips and outings together to destinations that were on or near the beach and waterfronts. Her favorites were cruises to Hawaii or road trips to Santa Barbara and the California coast, especially the Carmel area which is where they honeymooned. Many who knew Claire are aware, she was very patriotic, and loved supporting her country and the military. She was also often involved with the local fire and police departments as an active and caring citizen. Claire had a sense of style all her own with a constant, contagious and sparkling smile. She had a way of making a lasting impression on those she met, whether she knew you for an hour or a decade, she made you feel important and special. And in times of trouble, she would confidently quote, “this too shall pass”... Claire will be deeply missed by her dear family and wide circle of friends. Services will be held on Friday, February 21, 2020 at 12:00pm in the Chapel at Memory Garden Memorial Park and Mortuary. A Celebration of Claire’s Life will take place following the service at ‘The Park’: 1885 N. Hacienda Road, La Habra Heights, CA 90631. In lieu of flowers, please consider making a donation to The City of Hope: https://ourhope.cityofhope.org/ClaireSpot

Claire Ann Spothelfer (Davis) passed away on the morning of Wednesday, February 12, 2020 surrounded by her loving family. Claire was born on September 21,1934 in the Willowbrook neighborhood of Compton, California to Millard and Doris Davis.... View Obituary & Service Information

The family of Claire Ann Spothelfer created this Life Tributes page to make it easy to share your memories.

Claire Ann Spothelfer (Davis) passed away on the morning of Wednesday,...

Send flowers to the Spothelfer family.