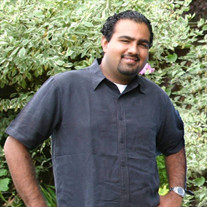 Chirag Dilip Vithlani unexpectedly passed on July 17, 2021 at the age of 37. He was born on August 1, 1983 in Dar es Salaam, Tanzania and moved to California just before his second birthday. Chirag was a beloved son, brother, nephew, cousin, and friend. Chirag graduated from Cerritos High School in Cerritos, California in 2001. While in high school, he took a keen interest in theater and performed in various musicals. Along with his love for theater, Chirag taught himself to play the guitar in the ninth grade and went on to develop a penchant for the guitar, musical instruments, and deep appreciation for classic rock. His self-taught musical talents carried over into his learning to also play the piano and ukulele. Outside of school and work, he was heavily involved with the Boy Scouts of America, starting at the age of six and ultimately earning the highest rank within the organization: Eagle Scout --- an achievement that only five percent of Boy Scouts attain. During his time in Boy Scouts, he honed his communication, interpersonal, and leadership skills, which he would later leverage throughout his personal relationships and career. After high school, Chirag went on to attend the University of California, Irvine where he majored in Computer Science with dual specializations in Artificial Intelligence and Network Infrastructure, graduating in 2006 with a Bachelor of Science in those studies. During Chirag’s time in college, he began working part-time at Best Buy to help pay for tuition and upon graduation, was offered a full-time position at the company, quickly becoming one of its leading salespeople in the country and ultimately earning him a management position. Chirag was a dedicated, hardworking, industrious individual who went on to hold multiple high visibility positions at the director-level in the technology sector, most recently as Director of Partner Development at Chargezoom. His willingness and readiness to help people in his personal life carried over into his professional life. He was an admired and respected part of the teams and entities he collaborated with and worked alongside. His ability to connect and motivate his peers made him an exceptional leader. Chirag is survived by his parents, Dilip and Mamta Vithlani and his brother, Gopal Vithlani. He also leaves behind his dog Sirius, many aunts and uncles, nieces and nephews, cousins, and countless friends which he considered family. His wit, smile, charm, and always positive personality will be sorely missed. A private memorial service will be held on Saturday, July 31st at 9:15 a.m. located at Memory Garden Memorial Park & Mortuary, 455 W. Central Ave., Brea, CA 92821. Condolences and memories can be shared at www.memorygarden.com/obituaries/. In lieu of flowers, please make a donation to a charity of your choice.

Chirag Dilip Vithlani unexpectedly passed on July 17, 2021 at the age of 37. He was born on August 1, 1983 in Dar es Salaam, Tanzania and moved to California just before his second birthday. Chirag was a beloved son, brother, nephew, cousin,... View Obituary & Service Information

The family of Chirag Dilip Vithlani created this Life Tributes page to make it easy to share your memories.

Send flowers to the Vithlani family.