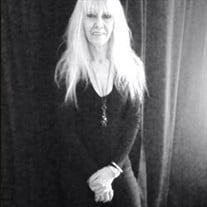 Life Legacy “You can’t be afraid of the dark or you’ll never see the stars.” –AnonymousOn September 30, 2016, Carol Marie Wade, 59, died peacefully in her Brea home surrounded by family and friends. She was born January 3, 1957, in Evergreen Park, Illinois, the daughter of John and Helen (Lipski) Rukuizas. Carol attended Amos Alonzo Stagg High School in Palos Hills, Illinois, graduating in 1975. She finally married her high school sweetheart, the late Kevin Wade, on April 30, 1976, in Palos Hills and gave birth to her only child, Victoria, in 1981. After her marriage, Carol relocated to Brea, California, in 1987 with her mother and daughter. Upon arriving, Carol worked a number of jobs before settling into a secretarial position at Mitsubishi. Because of her business acumen, Carol was eventually promoted to Junior Buyer, an accolade that helped procure her job of Buyer/Planner at Toshiba. She left the corporate world in 2001 to pursue her rekindled love of playing pool and began voluntarily helping the Orange County American Poolplayers Association. Then in 2005, the opportunity presented itself for Carol’s daughter to buy the business from the previous owner, and with Carol’s guidance, they turned the small franchise into a flourishing business. Carol was not just a driven business woman. She was also loyal, trustworthy, patient, and unselfish. She had a dry sense of humor, was fond of Elvis impersonators, played the accordion, collected Barbies, had to have bones in her chicken, rooted for the Minnesota Vikings, and enjoyed going to Palm Springs. But above all else, she loved being with her daughter, her dogs, and her closest friends at home.She is survived by her daughter, Victoria Wade of Brea; two dogs, Jake and Sammy; and countless friends.A memorial service will be held Sunday, October 9, 2016 at 11:00 a.m. at the following location: Memory Garden Memorial Park & Mortuary; 455 W. Central Avenue; Brea, CA; 92821. Please dress in colorful attire – no black. Reception will follow at the Wade house.

The family of Carol M. Wade created this Life Tributes page to make it easy to share your memories.

“You can’t be afraid of the dark or you’ll never...