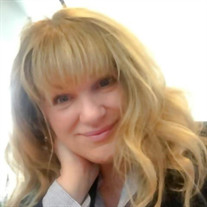 Caren Lynn Day of Studio City, California, passed away unexpectedly at the age of 56 on May 13, 2020, due to complications from Interstitial Lung Disease. Caren was born October 31, 1963, in Whittier, California to Claudia Day and the late Jim Day. She spent her formative years in Los Angeles and graduated from La Habra High School. She went on to earn a BA in Marketing Management at CSU Fullerton. Caren enjoyed a wide range of professional pursuits during her life. Following her graduation from college, she worked as a publicist in Los Angeles’s film and television industry. In her 30s,she decided to pursue her true passion, the arts, and spent four years working as a country music writer in Nashville. There, she developed numerous lifelong friendships and a number of notable working relationships in the country music arena. Returning to Southern California to be in closer proximity to her family, Caren worked on a number of books, eventually authoring and publishing the children’s book You and Me, which teaches young children about diversity and accepting others.In recent years, she focused her creative energies on developing and pitching a number of television and movie concepts, pursuing her dream of becoming a writer in the television industry. In 2015, Caren secured a position at Warner Bros. Pictures, where she provided administrative support in the marketing department, enabling her to utilize her creative talents and people skills while assisting with numerous special events and movie premieres. Caren was known for her creativity, warm smile, generosity, and unending kindness. She loved music, art, sunsets, a nice bottle of wine, and a good story. She was quick to strike up a conversation with anyone and was always there to lend an ear to a friend. Caren also loved to learn new things, recently teaching herself to speak and read French and taking piano lessons. The things Caren most cherished were her family, friends and her two rescue cats, Ami and Voila. She was a beloved daughter, sister, niece, cousin and godmother. Caren is survived by her mother, Claudia Day; sister, Cheryl Day;and an extended family, including her uncle Robert Basset; her uncle and aunt William and Helen Bassett; her cousin Kaye Bassett and her husband, Khalil Cox, and their children Audrey and Theo; her cousin Rosalind Bassett and her husband Mark Pullen, and their children Rhys, Sloan and Mitchell; and her cousin Barton Bassett and his wife Tiffany, and their children Aidan, Anna and Lauren. She is missed by her entire family, as well as her many friends and colleagues, who loved her and will always remember her. The family will announce a memorial service and celebration of Caren’s life at a later date when the COVID-19 restrictions are lifted.In lieu of flowers, donations may be made in Caren’s memory to one of the following charities: • Sante D’Or – Local cat rescue – www.santedor.org • Best Friends Animal Society – www.bestfriends.org • LA Animal Services: http://www.laanimalservices.com/donate/

Caren Lynn Day of Studio City, California, passed away unexpectedly at the age of 56 on May 13, 2020, due to complications from Interstitial Lung Disease. Caren was born October 31, 1963, in Whittier, California to Claudia Day and the late... View Obituary & Service Information

The family of Caren L. Day created this Life Tributes page to make it easy to share your memories.

Customized sympathy cards. Mailed for you.