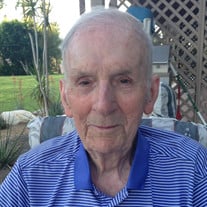 Dr. Billy Joe Shell, 95, went to be with his Lord and Savior Jesus Christ on Tuesday July 27, 2021 peacefully in his home in Rancho Mirage, California. Born in Ecorse, Michigan, September 2, 1925 to a modest hard working family of 6 boys he grew up loving his country and embraced the American Dream. First in his family to work his way through college he ultimately earned a PHD in Civil Engineering at Michigan State University. He served his country in the Marine Corps until the wars end spared him from joining the effort in the Pacific. As a young engineer working on the government’s atomic energy program in Hanford, Washington, he met Edythe Lorraine Roach of Moscow, Idaho, who was also working on the project. Bill and Ede were married on a Christmas Day and enjoyed 68 anniversary celebrations together. They were dedicated to raising their family with Christian values and a parent at home. Ede became the head of the home and supported Bill’s career. While a professor at the University of Arizona and head resident of a dormitory, they were blessed with a daughter Deborah Louise. Three years later while finishing his doctorate in Lansing, Michigan they had a son, Brian Jeffrey. After several years back in Tucson as the Chief Engineer with San Xavier Rock & Sand, he combined his love of the academic environment with his Civil Engineering experience and accepted a position with Mississippi State University as associate Dean of Engineering. He thoroughly enjoyed working with the students and faculty. He worked diligently in the development of programs that supported the growth of Mississippi State and was one of the original project managers in the development of “Life Flight” in the state of Mississippi. He continued to thrive in various Administrative positions in University environments and relocated to Cal Poly Pomona in the late sixties as Dean of Engineering. Ultimately he served as President of Northrop University in California for many years before retiring in the early 90’s. His career involved extensive international travel and he touched the lives of hundreds of students from all over the world. Bill was a Freemason, was active in several churches, Rotary Clubs and Chambers of Commerce throughout his career in official capacities. He sat on state boards and was recognized and received awards from many organizations for his contributions. He loved being a teacher and always had an open door. He was available to help, counsel and mentor all those that came to him requesting direction and guidance with decisions in their lives. In retirement, Billy Joe and Ede lived in Brea, California where they enjoyed their children, grandchildren and many friends and relatives. They moved to Rancho Mirage in 2015 to live close to their son Brian and his wife Doris and enjoyed regular visits from daughter Deborah and her husband Terry. Billy loved Christian hymns and enjoyed playing them on the piano to his very last days on earth. Dr. Billy Joe Shell lives on in our remembrance as a godly man who lived a Christian life, greatly admired by all those who knew and loved him.

Dr. Billy Joe Shell, 95, went to be with his Lord and Savior Jesus Christ on Tuesday July 27, 2021 peacefully in his home in Rancho Mirage, California. Born in Ecorse, Michigan, September 2, 1925 to a modest hard working family of 6 boys he... View Obituary & Service Information

The family of Dr. Billy J Shell created this Life Tributes page to make it easy to share your memories.

Send flowers to the Shell family.