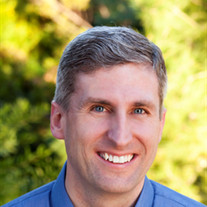 Benjamin Parker Broderick was born October 13, 1968 in Bellafonte, Pennsylvania to Carlfred and Kathleen Broderick. His father was a professor at Penn State (and Ben loved PSU football for the rest of his life). He was the youngest of eight children. When he was three the family moved to Cerritos, California where Ben lived for the rest of his life before getting married. He remembered that car trip across the country very vividly. He remembered loving to sit in the wheel well of the family’s station wagon, watching the amazing scenery from the seemingly exotic places they drove through. Ben had an idyllic childhood in his home. He loved the fabulous birthday parties his mother would throw, the games he played with his siblings, the singing the Broderick family always seemed to be doing, and the gospel conversations that were such a part of his home life. Ben loved studying the gospel and sharing that love with one and all. He served a two-year LDS mission to Norway when he was 19. It was a very difficult mission for him, but in later years he would comment on how valuable a learning experience it was. He loved studying scriptures and trying to understand the gospel and the plan of salvation more fully. Ben was always an idealist. He was involved in political and social causes, community service, and in trying to improve the way “the system” (whatever system it was) worked. His idealism led him to get a degree in film from the USC film school in order to make documentaries. He graduated Summa Cum Laude on May 8, 1992, with his film degree and with a minor in International Relations. Ben met Jonia Allen in the Southern California Mormon Choir on March 25, 1992. Their courtship consisted of talking after choir for long hours, one date to Forever Plaid, and singing at one funeral. Ben proposed for the first time on May 20th. They formalized it the next week at Disneyland’s wishing well, and formalized it yet again in June with the ring and the formal asking of Jonia’s dad for her hand. They were married in the LDS Manti Temple November 28, 1992. For a few years after marriage Ben sold insurance, sold stocks and bonds, and worked as a court reporter and proofreader (with Jonia as his boss). It was that last job that convinced him to become a lawyer – the one job he had vowed never to do. By now Ben and Jonia had their wonderful daughter Jonia Elizabeth, who was born March 6, 1996 in Glendale, California. From the very beginning he was wrapped around her little finger. His world revolved around his little girl (no matter how big she got!). In 1997 Ben began law school at BYU’s J. Reuben Clarke Law School, where he graduated second in his class in 2000. After school the family of three moved back to Southern California – to the city of Fullerton. He began working at Gibson Dunn & Crutcher in Los Angeles where he remained for 10 very successful years. After Gibson he moved to Theodora Oringher – a place he truly loved. He was there for 5-1/2 years. Ben always said that his only real hobby was his family – and he showed it by the time he spent with them. They loved to sing together, travel together, talk history, politics, social issues, and literature together, and just have fun together. They travelled together to all 50 states, Canada, France and the British Isles. Ben served in his church in a variety of callings – his favorite being the adult Sunday School teacher. He also served as Ward Mission leader twice, Elder’s Quorum President twice, Stake Sunday School President, and as counselor in three bishoprics. He was a very loyal and loving husband, a fantastic father, a caring son and brother, and a devoted follower of the Savior. His example of Christlike service and devotion touched many hearts and blessed many lives. Ben passed away suddenly on Thursday, July 2, 2015. He is survived by his wife, Jonia, his daughter, Jonia Elizabeth, his mother Kathleen and by his seven siblings Kate, Carl, Victor, Wendi, Jenifer, Frank, and Beverly.

Benjamin Parker Broderick was born October 13, 1968 in Bellafonte, Pennsylvania to Carlfred and Kathleen Broderick. His father was a professor at Penn State (and Ben loved PSU football for the rest of his life). He was the youngest of eight... View Obituary & Service Information

The family of Benjamin 'Ben' Parker Broderick created this Life Tributes page to make it easy to share your memories.