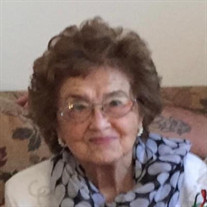 Our beloved mother, Beatrice Gulden (Bea) longtime resident of Brea, CA, died peacefully on Tuesday, December 22, 2020 at the age of 94. Bea was born on the island of Java, Dutch Indonesia, on March 29, 1926 to the late Bernard and Jeanne Damwyk. Her family had lived in the Dutch East Indies since 1860. Bea was the second oldest of seven sisters. She lost her father when she was 12 years old and at the age of 14, she and her sisters and mother were sent to a Japanese concentration camp in Indonesia during WWII for four long years. It was a difficult time for Bea and her family, however, it taught her the importance of family and how fragile life is. In 1946 Bea married Albert Gulden. During her amazing lifetime, they lived in the Dutch East Indies (Indonesia), Dutch New Guinea (West Papua), the Netherlands and the United States. In 1960 Bea, Albert and their four children emigrated from the Netherlands to the United States, settling in California to start a new life. Close family ties were particularly important to Bea. She invested her energies in maintaining strong bonds with her family and friends. Family gatherings with friends and neighbors became rituals. Bea loved her home in Brea and spent hours gardening in her backyard or tending her roses in the front yard. She especially enjoyed good food and socializing. She loved her neighbors and was known throughout the neighborhood as Oma. She was a great cook of Indonesian cuisine. She also enjoyed traveling, theatre, and music, music, and more music! Bea lived a full life and was genuinely loved by all and will be deeply missed. Her love, wisdom, laughter, quick wit, and wonderful sense of humor will be remembered by all who had the good fortune to know her. Her greatest gift to her family was her unconditional love and support. Bea was preceded in death by Albert, her loving husband, two sisters Hedy and Ellen, and Arie a long-time life companion. Left to honor and cherish her memory are her four children: sons, Robert (Linda) and Hans (Grace), and daughters, Linda Freimanis (Chuck) and Janine Wile, four sisters, Ine, Winnie, Renee and Sylvie, ten grandchildren, Katheryn, Lora, Gerrit, Renee (Robert), Jennifer, Stephen (Hans), Stephanie, Raeana, Shawna (Linda) and Matthew (Janine), many great grandchildren and great-great-grandchildren, special friend Wim and numerous nieces, nephews and the best neighbors ever! If so desired, memorial gifts may be made to Nathan Adelson Hospice of Las Vegas Bea will be interred in Brea Memory Garden next to her husband Albert. A Celebration of Bea’s Life will be held when it is safe to do so. RUST ZACHT MAM

Our beloved mother, Beatrice Gulden (Bea) longtime resident of Brea, CA, died peacefully on Tuesday, December 22, 2020 at the age of 94. Bea was born on the island of Java, Dutch Indonesia, on March 29, 1926 to the late Bernard and Jeanne Damwyk.... View Obituary & Service Information

The family of Beatrice "Bea" Gulden created this Life Tributes page to make it easy to share your memories.

Send flowers to the Gulden family.