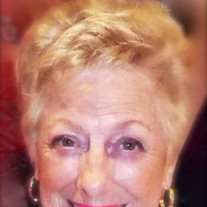 Mary “Anne” Steele, AKA, Mama, Ma, Granny, Auntie Anne, Mama Bear, Sweet Cheeks, Goose, passed away on October 11, 2014. Her exit was unexpected as she was in full stride, living life to its fullest and on her own terms. Anne was born in Bell, California on September 20, 1936. She grew up knowing how to ride horses, pick cotton and was the official babysitter for her many cousins. She attended Fullerton High School and developed friendships, that to this day, still remain. She met her husband while in high school and when Bob returned from his Korean tour of duty in the navy, they married. Anne was 19. She was married to the love of her life for over 58 years...yes that still happens. At the age of 21 and two years into her marriage, twin daughters, Jackie and Cindy arrived. Surprise! Two years later, Cristy was born, completing the family of five. Anne was a hands on mother and made life a colorful adventure. Anne was many things to many people. She was active in the PTA, Girl Scouts, Kiwanis, Eastern Star and could cut a rug with the best of them. She started playing golf at the age of 50 and developed wonderful friendships as well as a great swing. She was active in the Dream Foundation for 15 years, crocheting blankets for terminally ill adults. The cashiers at the market, the tellers at the bank and the servers at her favorite restaurant all knew her by name. She was truly unforgettable. Anne WAS Christmas. Her childhood home was rooted in the Christmas spirit as it was transformed into a Christmas wonderland each year. She carried that spirit to her own home, making it a place that, well, just had to be seen to believe. In 1993, Anne started her own tradition with her daughters with a trip to Las Vegas, an annual gathering that lasted 21 years. Her traditions continued with her annual epic ”Cuzzie” reunions. She had the natural ability to bring people together in a very meaningful way. Anne is survived by her daughters; Jackie, Cindy, Cristy. Her stray Cupie, Sons-in-laws; Jack, Ron, Mike and George. Grandchildren, Christopher, Jennifer, Michael, Andrew, Parker, Niffer and Lindsay. Great granddaughter, Lauryn. Her uncle and father figure, Don. Anne is preceded in death by her her husband, Bob, her parents, Andy, Mae, Vernie (Rabbit) and her little dog Scruffy. Anne arrived in heaven in her glad rags and pink pucker paint, a lighter in her pocket and on the arm of Bob, who had a smile on his face. Let the party continue. In lieu of flowers, donations can be made to the Dream Foundation. www.dreamfoundation.org Visitation held Tuesday evening, October 21st,from 5 - 8 Reception immediately following internment, Wednesday, October 22nd Embassy Suites Brea 900 East Birch Street

Mary &#8220;Anne&#8221; Steele, AKA, Mama, Ma, Granny, Auntie Anne, Mama Bear, Sweet Cheeks, Goose, passed away on October 11, 2014. Her exit was unexpected as she was in full stride, living life to its fullest and on her own terms. Anne was... View Obituary & Service Information

The family of Anne Steele created this Life Tributes page to make it easy to share your memories.

Send flowers to the Steele family.