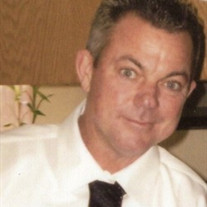 Andre Paul Scotka was born May 3, 1963 in Houston, Texas.  Two years later his family moved to California, settling eventually in Walnut where he had his education. This is where he built most of his friendships, memories, and had the best of times.    Andre played hard, he had energy that needed to be spent.  In his youth he played flag football and rode a dirt bike, the later he continued even into his young adult years. Thankfully for mom’s sake, the thrill eventually changed to mountain bike riding. He suffered many injuries and road rash from these sports, but not much kept him from the thrill of it all.    He enjoyed everything about the outdoors; a Sunday drive to the desert or the mountains, hanging out by the pool or at the lake, or fishing while visiting with friends. He enjoyed today and hardly planned ahead. Work hard, play harder and live for today; that was Andre.  Many of you had the pleasure of being a part of it. In his youth, there were many camping trips with the Reynolds family and many family trips to the High Sierras , Northern California.  As family schedules got busier it was weekends in Big Bear or day trips anywhere within reach.    His smile was enduring, his laugh a chuckle, and his heart always warm. He had no enemies and could make a friend in an instant. He had a nick name or a slang name for you as a greeting, he would start with "what's up" and then fill in the blank with bucket head, loser, or some other slang description that need not be repeated here. He had a constant energy about him.    What was that Beach Boys song about a car "She's real fine my 409, my 4-0-9".  Well for Andre it was because he was Mr. Clean. It was what kept him busy.   He loved his children Justin and Leanne. Even though they are 20 odd years apart he managed to have the same energy with them both. Chuckle E. Cheese or Knott’s Berry Farm, he was just a big kid himself.    Since his young adult life Andre loved a party. It was evident in the photos the family looked through this past week. Wow what a fun life he had. He functioned for many years with his party. But as life's years and experiences bring hardship he began to party alone. He didn't grip that he wasn't alone.    Now he is in peace with Mom and Dad on a big lake in the mountains where the views are amazing. He is looking down watching us. So talk to him now and again in your thoughts and prayers.    As he would often say, “No sniffling!”   He is preceded in death by his parents, Melanie Babette Graf and Raymond Louis Scotka.  He is survived by his children Justin and Leanne Scotka and his sisters Carmen (Dean) Toneck and Michele (Andrew) Tate.      Michele Tate

Andre Paul Scotka was born May 3, 1963 in Houston, Texas.  Two years later his family moved to California, settling eventually in Walnut where he had his education. This is where he built most of his friendships, memories, and had the best of... View Obituary & Service Information

The family of Andre Paul Scotka created this Life Tributes page to make it easy to share your memories.