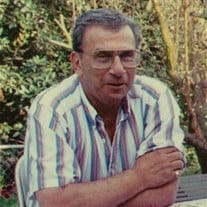 Albert Edwin Tobey was born in Los Angeles, CA on April, 9, 1933 to Edwin and Eugenie Tobey. Al had one brother, Michel (Mitch). He went to all Catholic schools in Los Angeles, including Mount Carmel High School in South L.A. He attended Los Angeles City College and received his bachelor’s degree in engineering from California State University, Fullerton. Al had a number of jobs starting at a young age but gained a lot of experience as a designer in Hoffman’s Engineering design department working on radar systems, televisions and analog computers. In 1957 Al joined Hughes Aircraft Company working on radar systems for the Navy. He worked on a number of defense-related projects before retiring in 1996. While Al enjoyed great success with his career, his true passion was reserved for his family and his hobbies. In 1960, Al married Joanne King; they went on to have two children, Juli (Lucy) and Michael. Al and Joanne traveled the world together, seeing more than twenty countries over the years. And all along the way, Al took photos. Whether film or digital, home movies or video, Al documented every milestone and memory. His lifelong interest in cars probably began when he raced cars in the ‘50s. It was a favorite topic of discussion that endeared him to his nephews. For the record, his dream car was a Cobra. For sports, he was a loyal and enthusiastic Rams fan. Al and Joanne were longtime members of Los Coyotes Country Club, where they were active tennis players. Al also played golf and was proud of his hole-in-one at LCCC. He eventually convinced Joanne to join him on the course. Al found a new subject for his camera in 2005, when his grandson, Michael, was born. They shared an interest in how things work, especially computers and photography, with Michael often serving as photo assistant. Al died at St. Jude Medical Center on Monday, January 14, surrounded by his family.

Albert Edwin Tobey was born in Los Angeles, CA on April, 9, 1933 to Edwin and Eugenie Tobey. Al had one brother, Michel (Mitch). He went to all Catholic schools in Los Angeles, including Mount Carmel High School in South L.A. He attended... View Obituary & Service Information

The family of Albert Edwin Tobey created this Life Tributes page to make it easy to share your memories.

Send flowers to the Tobey family.