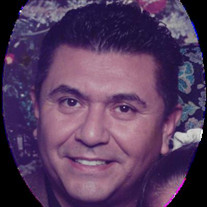 Agustin Jose Ponce of La Habra, CA, was called home by our Heavenly Father on Friday, September 3, 2021 at the age of 67. Agustin Jose Ponce, also known as “Gus,” was born on July 13, 1954 to Agustin Ponce and Maria Angela Ponce. He grew up in Lincoln Heights, CA and graduated from Cathedral High School in 1972. Gus worked in construction and for UPS, then grew into a businessman. He was the owner of two Mexican-American restaurants from 1985 to 1992 and later would become a self-employed car salesman. Gus was an avid lover of sports. His favorite teams were the Los Angeles Dodgers and Lakers. Gus is preceded in death by his father, Agustin. He is survived by his wife, Nicole, and their two daughters, Sabrina and Dominique; his first wife, Dolores, and their three children, Venetia, Denay and Jose; and his son Justin. He is also survived by his mother, four sisters, five grandchildren, and 2 great grandchildren. Gus was an authentic, charming and wise old soul who loved to laugh and joke. Although he had a strong personality, he cared, loved and prayed for everyone. He loved the Lord and did his best to live a good Christian life. He will be missed dearly by his family, friends, and all who knew him. A funeral service will be held 12:00pm on Sunday, September 26th at Memorial Garden Memorial Park & Mortuary at 455 W Central Ave., Brea, CA. The family would like to thank you for your thoughts and prayers during this difficult time. God Bless!

The family of Agustin Jose Ponce created this Life Tributes page to make it easy to share your memories.

Agustin Jose Ponce of La Habra, CA, was called home by our Heavenly...

Send flowers to the Ponce family.